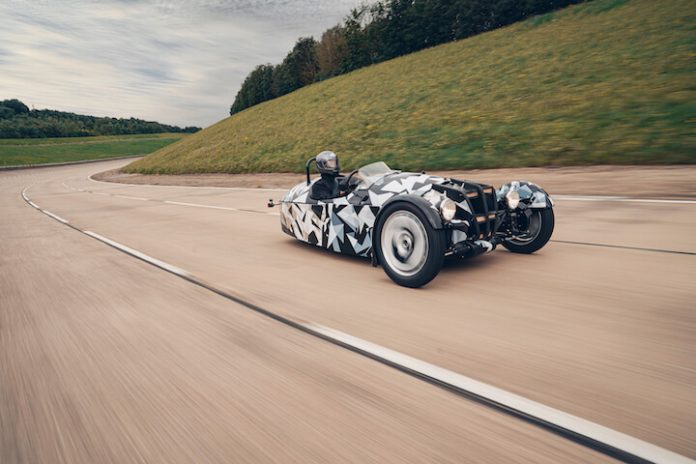 As car manufacturers brave turbulent times, TV presenter and journalist Alex Riley looks at why Morgan is leading by example.

Of all Britain’s specialist car manufacturers, you can’t help but take your hat off to Morgan.  On the surface they seem utterly traditional, but they’re simultaneously forward-looking and innovative.  In 2011, they pulled off one of the most unlikely comebacks in motoring history – they launched a new 3-Wheeler, just fifty-nine years after the original had gone out of production.  It’s been Morgan’s best-seller ever since, but regulations have finally caught up with it so – in a life-cycle pathetically short by the standards of a company whose products usually stay around for decades – it’s being phased out.  But a new and radically different three-wheeler model is promised for next year. 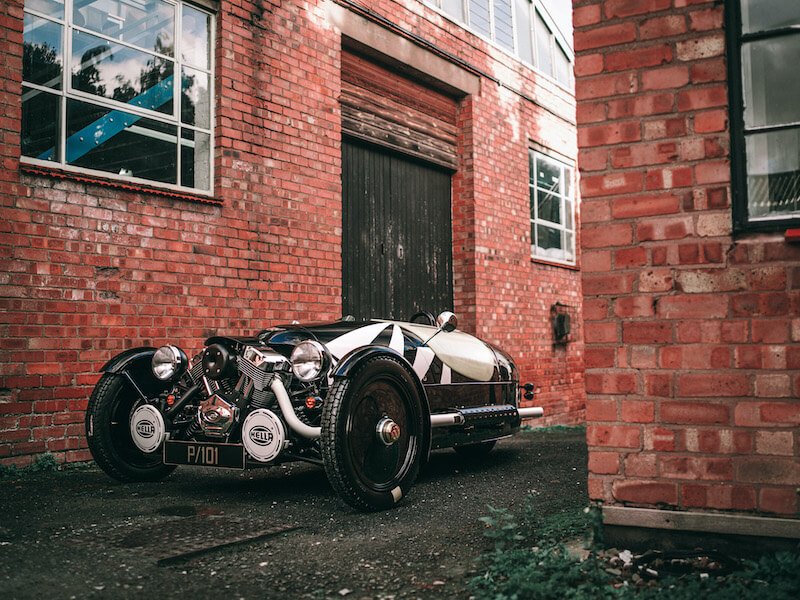 More than 2,500 three-wheelers have been sold over the decade, accounting for up to 35% of total production and its popularity can probably due to the fact it offers a genuinely unique driving experience.  Powered by a 2.0 litre V-twin motorcycle engine, hung out ahead of the front axle, with tall and skinny exposed front wheels and power going to a single rear wheel, the visceral sensation of driving it has been likened to piloting a pre-war open-cockpit aeroplane. No wonder some of the graphic packs riffed on the liveries of RAF fighter aircraft.

The key to its unlikely existence is the fact that as a three-wheeler it avoids a number of rather expensive rules and regulations, especially in America where it’s classed as a motor-tricycle.  But its engine, made by S&S in the US, can no longer meet emissions standards, and so production will cease towards the end of the year. 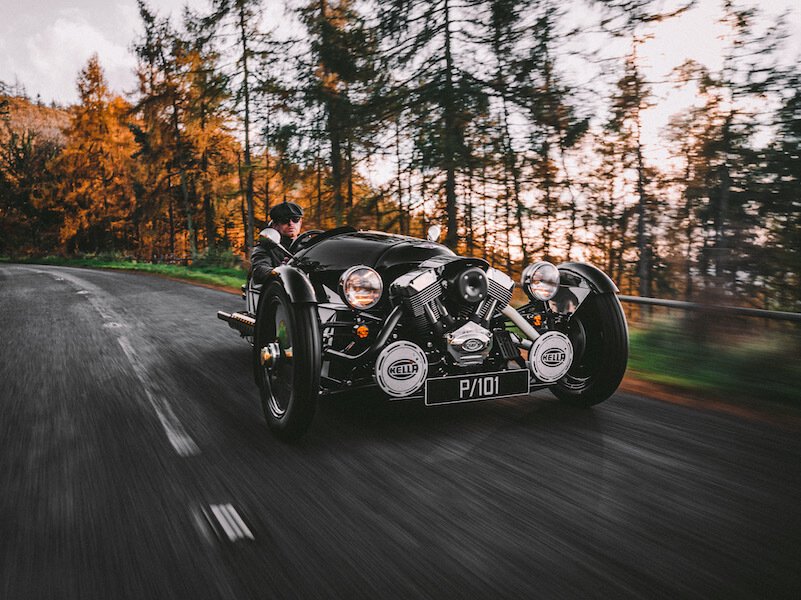 This will prompt the new model’s most radical change.  Out goes the classic air-cooled V-Twin and in comes a 50% more powerful water-cooled Ford 3-cylinder – as used (with a turbocharger) in the Fiesta ST.  This has prompted major engineering changes, as Head of Design Jonathan Wells explains ‘we didn’t want the bodywork sitting forward of the front wheels, so we’re putting the engine in-board behind the front axle – where people’s feet once were…and then we’ve got to keep the engine cool so we’ve also had to package two radiators, one at each side.’

So while the engine will no longer be on show, there’ll still be plenty going on at the front ‘there’s a lot of structure on view – to hold the radiators and front suspension and for ducting air to the radiators.  It makes for a very complicated mechanical front end, but the look is driven by functional requirements, which is very Morgan.’ 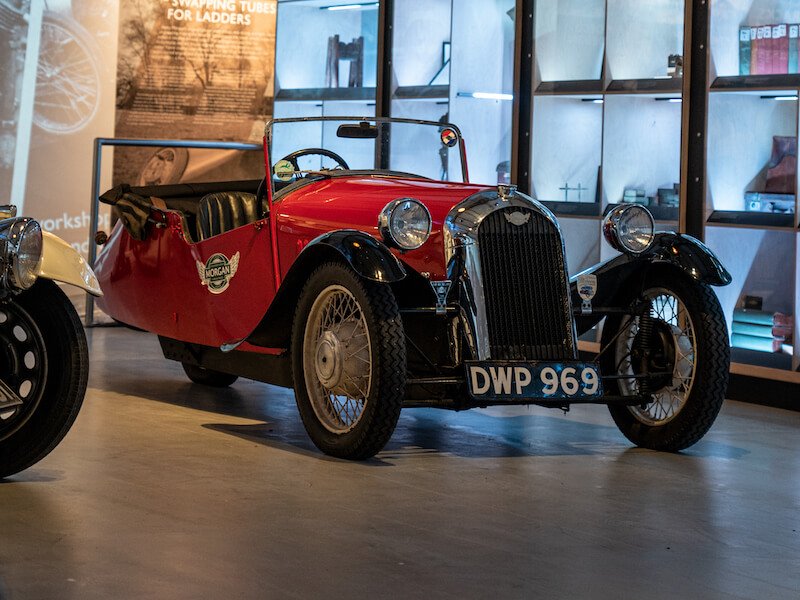 This won’t be the first Morgan three-wheeler to have an in-board Ford engine.  Starting in 1933, Morgan’s four-seat Family models had in-line Ford side valve engines behind a traditional grille to appeal to more conventional tastes.  But while there is no prospect of the new car having room for the family, the intention is to make it accessible to more customers, while keeping the visceral experience intact.

The cabin will offer more width and the driver will sit lower, allowing a wider range of shapes and sizes to get comfortable.  And Morgan are keen to support the surprising number of owners who are using 3-wheelers for long distance adventures, in spite of its uncompromising layout, and lack of weather protection.  ‘If you want to travel across Europe, we’re going to make sure everything’s there for you to do that’  The fuel tanks, currently in the tail, have been moved forward, making space for a much larger boot, and there are brackets for panniers.  You’ll also be able to swap the tiny aero screen for something more enveloping.  Morgan will sell a range of appropriate accessories, as they do for the recently announced ‘adventure’ oriented Plus Four CX-T.  Thankfully, overall size will not grow and weight is expected to remain around the 500 kilo mark.  So with 50% more power, acceleration should be remarkably vivid even with extra luggage, maybe as low as 5 seconds to 60….. 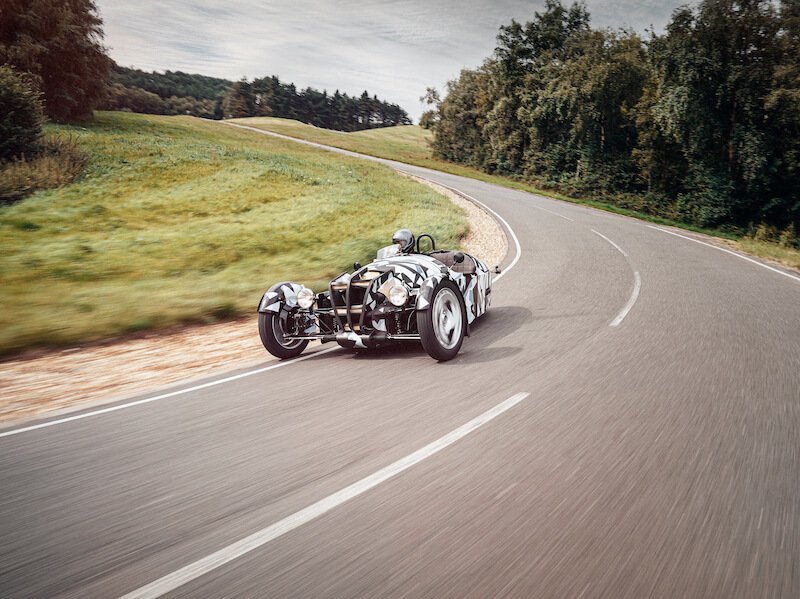 Aerodynamics will also play a part.  With the engine tucked away, managing the airflow on the new model becomes much easier.  ‘Diffuser plates’ will be fitted which are designed to extract warm air from the engine bay and keep the airflow attached along the sides, reducing turbulence.  They also offer a blank canvas for the paint jobs and decal sets that have been a big feature of the current car.  An optional rigid half-tonneau will give the driver the sensation of driving an offset single-seater, in the style of a 50’s sports racer.

As for styling, the new three-wheeler is the first step in Morgan moving its design inspiration forward a few decades,  ‘I think there’s a great opportunity for us to evolve the look from the 40’s/50’s to a really interesting mid-century aesthetic.  Think of something like an XK120 and how that evolved over the years to become the E-type.’ 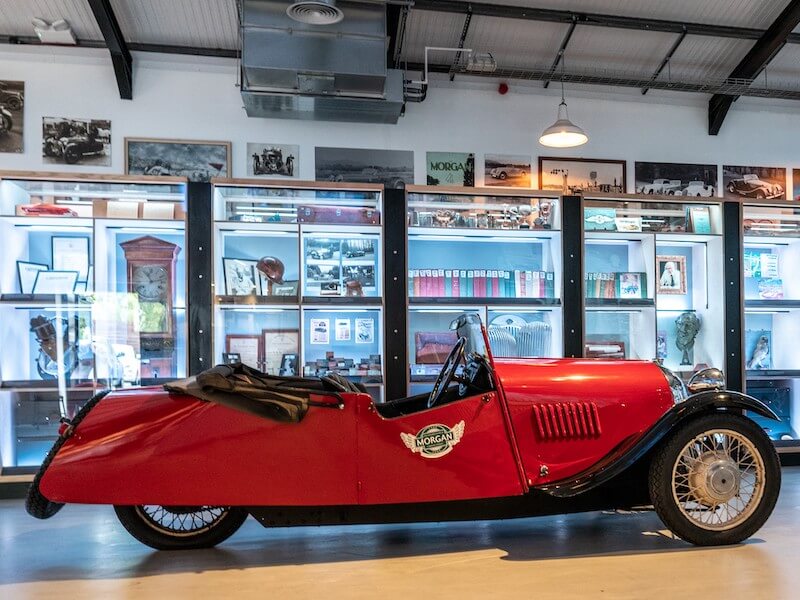 The driving experience will evolve too thanks to an all new aluminium chassis.  ‘The new car’s a very different proposition to the outgoing 3-wheeler.  The power is delivered much more progressively, there’s much more of it and it’s got that lovely 3-cylinder warble, like half a flat six.  And the new platform technology means the suspension is much more compliant.  You can still steer it on the throttle but it’s a much more enhanced car dynamically.  It’s not just a car for a Sunday afternoon blast, you’d feel as comfortable loading it up with luggage and going away for a long weekend too.

Currently undergoing much more comprehensive durability testing than ever before, the new 3-wheeler is expected to launch early next year.  Jonathan Wells sums up the new car ‘It’s still a coach-built Morgan, but it’s like the migration from a bi-plane to a jet-engined aircraft…..’  I can’t wait.