Only one in the UK. 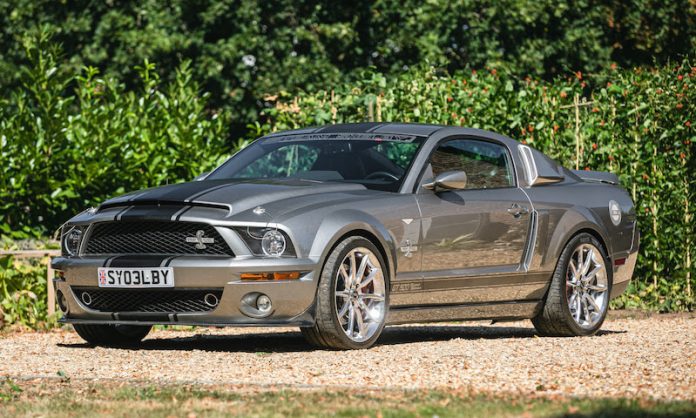 Classic Car Auctions (CCA) will offer this Carroll Shelby honed beast at their September 24th sale. It is capable of 134mph in ten seconds.

Legendary race driver turned automotive designer Carroll Shelby said of this creation: “The Ford Shelby GT500 is fast, but hardcore enthusiasts asked us for a way to make their Shelby a more aggressive, balanced, performing track car. Thanks to our partnership with Ford Racing, our Super Snake package will make their Shelby GT500 one of the most balanced, fastest, fearsome muscle cars in the world.” 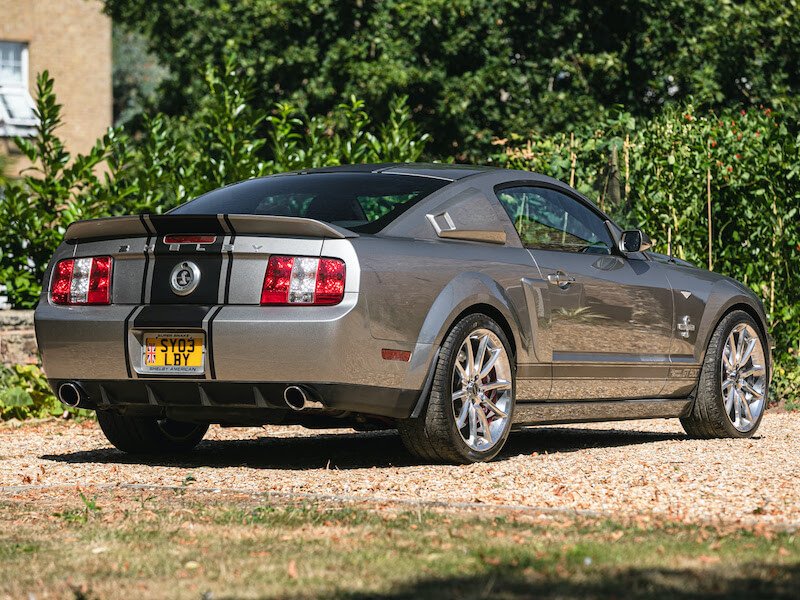 “We looked to improve every aspect of the car,” states Gary Patterson of Shelby. “The car is lowered and has a more aggressive stance. We went to Baer and they did a nice Shelby-branded caliper that has forged, six-piston calipers, and the rotors are cross-drilled and vented. The rear gets 14-inch diameter rotors. The brakes are repeatable, especially on a road course. We also included brake ducting front and rear.”

The big daddy 725hp monster also gets a 3 1/2-inch Aluminium single driveshaft because, as Patterson states, “the factory unit turns into a pretzel with that much power.It was important that the cars are emissions legal for 50 states, for either upgrade,” he adds. “The tune is also very safe and we’re not running the ragged edge.” 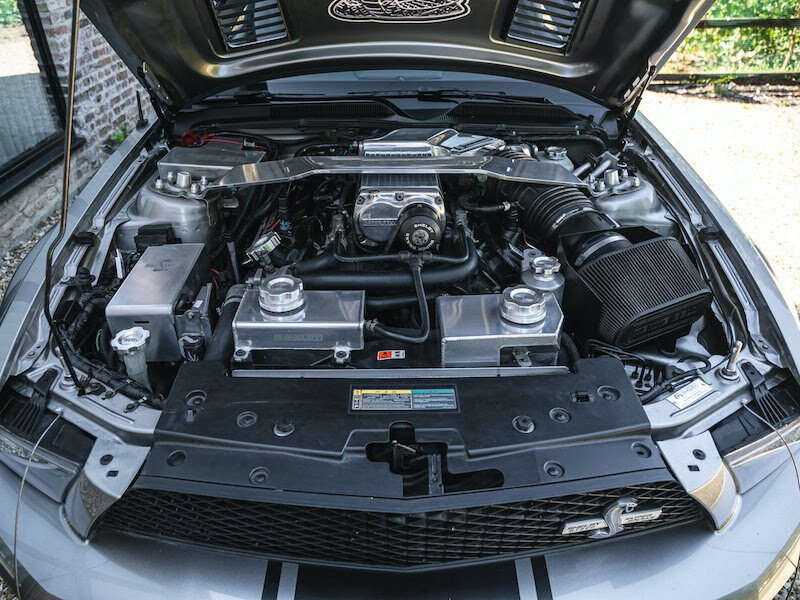 Shelby Automobiles use newly-developed Ford Racing GT500 performance packs to help transform a limited number of 2007 and 2008 Ford Shelby GT500’s into fire breathing “Super Snake” coupes. The Super Snake post-title package will include enhancements to the Ford Shelby GT500’s handling, styling and power; tuning options will range from a warranted 600 HP V8 to over 725 HP (unwarranted). Only a limited number of Super Snakes are built per model year at the Shelby Automobiles facility in Las Vegas beginning in late 2007.

“My team at Shelby Automobiles is always working on new ways to build better performing cars” said Carroll Shelby. “I told them that I wanted to build a vehicle that could blow the doors off most anything on the planet. By partnering with Ford Racing, we’re giving enthusiasts a Mustang with that level of performance.” 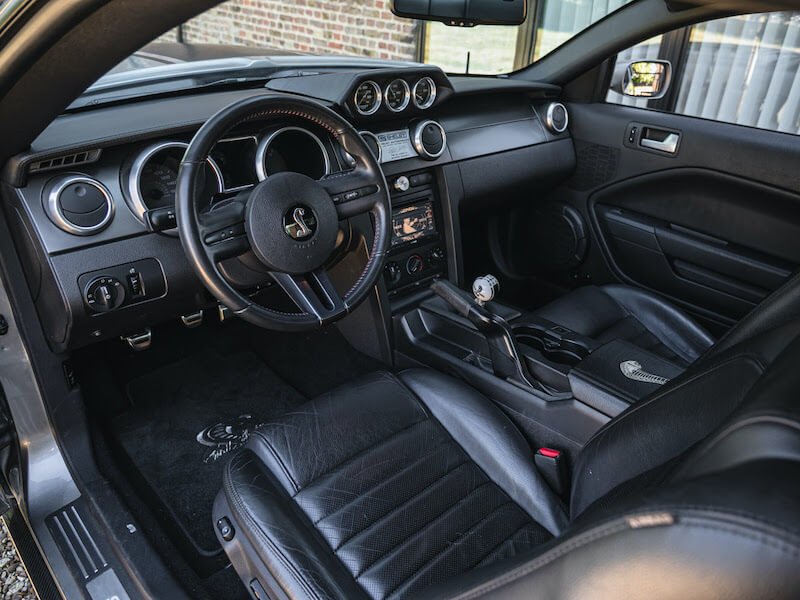 Working together at the Las Vegas Motor Speedway and in Dearborn, Ford Racing and Team Shelby developed the aggressive suspension and engine package specifically for the car.

“Mustang enthusiasts are demanding more from both Ford Racing and Shelby Autos” said Jamie Allison, Manager of Ford Racing Performance Group. “The GT500 Super Snake package, with its higher horsepower levels and balanced track-inspired tuning, satisfies those demands and then some … in a uniquely Ford – Shelby way.” 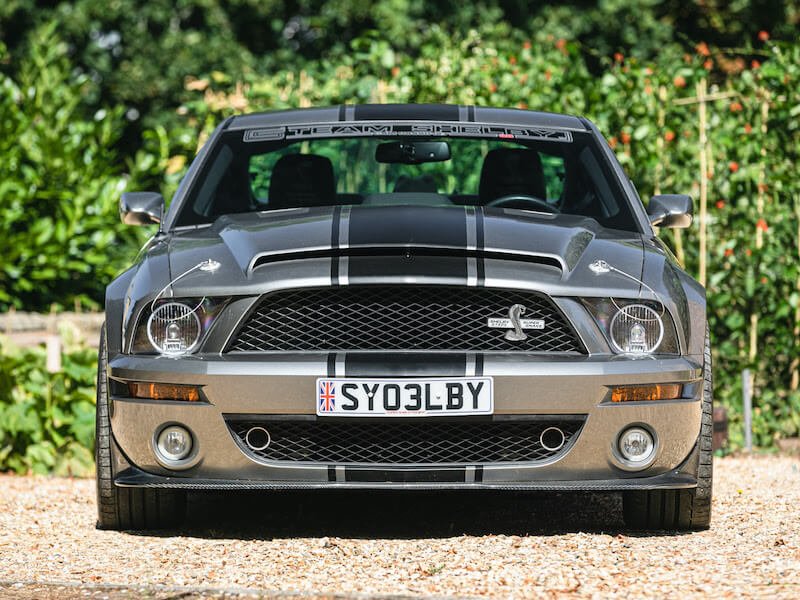 In 1967, Shelby American built one 427-powered GT500 “Super Snake” for Mel Burns Ford. Carroll Shelby drove it at the Goodyear test track for tire promotion film production. That car reached lap speeds of over 150 mph and a top speed of 170 mph. The new Ford Shelby GT500 Super Snake will be equally potent.

“The name ‘Super Snake’ is legendary because the one that Shelby built was the pinnacle of muscle cars in 1967,” added Amy Boylan, president of Shelby Automobiles. “We’re bringing that concept forward 40 years for customers who own a Ford Shelby GT500. We’ll give their car amazing new capabilities.” 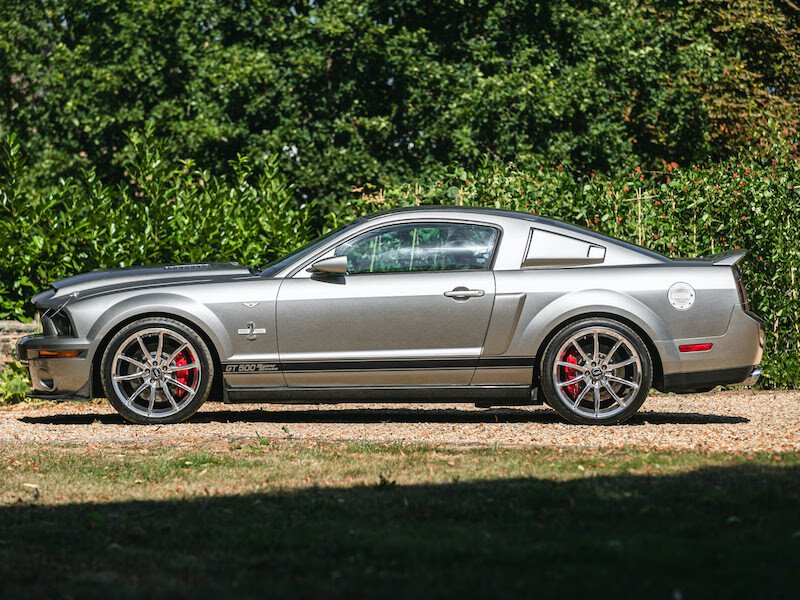 So how does it run in the quarter mile? Well, the February 2009 Muscle Mustangs & Fast Fords magazine using a 100% street legal SuperSnake not set up for the track with slicks, but with street tires ran 10.870 seconds at 134.14 mph. They estimate that with a Supersnake set up with slicks, softer springs, and some weight removed it would hit mid 10’s and about 140 mph.