We look at the classic cars heading for auction in October 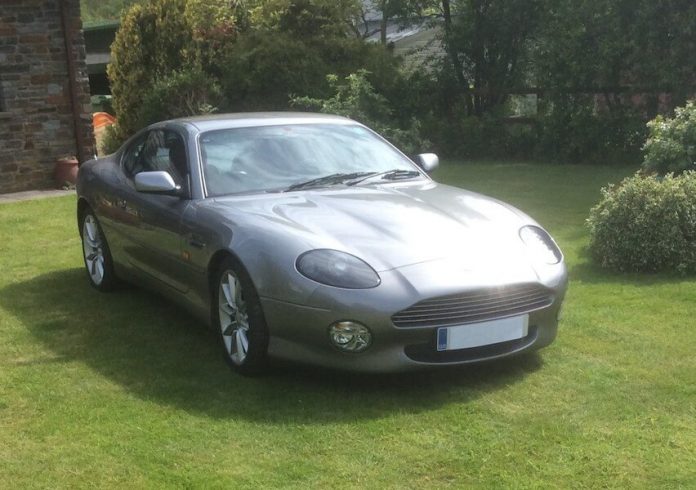 Until recently classic car auctions went quiet in August but as buyers demand more sales that’s no longer the case. Now October’s the month for fewer sales, the quiet before a busy November and December run-up to Christmas.

October’s classic car auctions are concentrated on the beginning and the end of the month. They start with Charterhouse on the 5th and H&H on the 6th, bookended by Brightwells’ timed online sale ending on the 28th and SWVA’s live online sale on the 29th.

Charterhouse kicks things off at the Haynes International Motor Museum and will be looking to repeat the success of its last sale – its most successful to date.

It’s a truly mixed bag that includes the first Aston Martin DB7 sold to the public (as well as a 2000 DB7 Vantage). If buyers crave something more traditional, Charterhouse’s Noah’s Ark also has a pair of MGA 1500 Roadsters and a pair of performance Minis – a 1971 Cooper S recreation and a 1980 Clubman 1275GT. 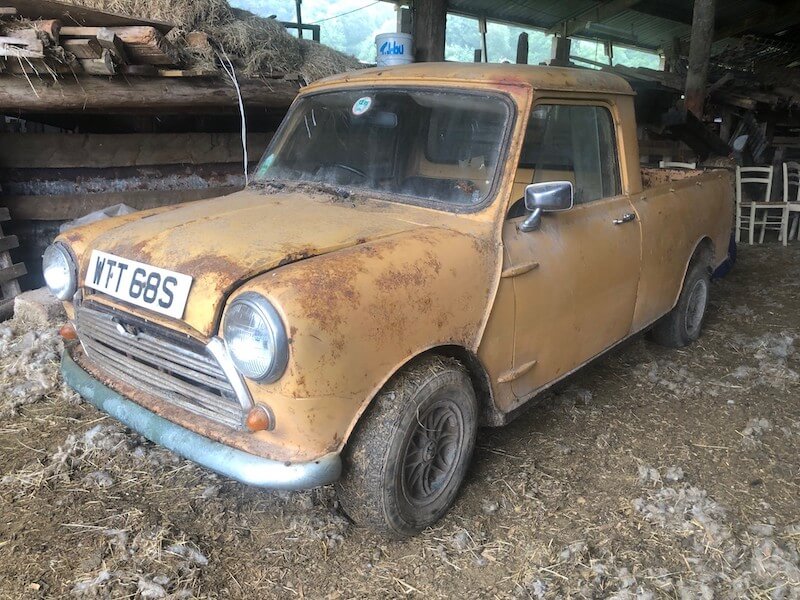 Those two are joined by a 1978 Mini pick-up project (est: £2000-3000) that should offer plenty of time occupying one the clocks have changed. And it’s fitted with a set of Cosmic alloy wheels, which surely seals the deal. 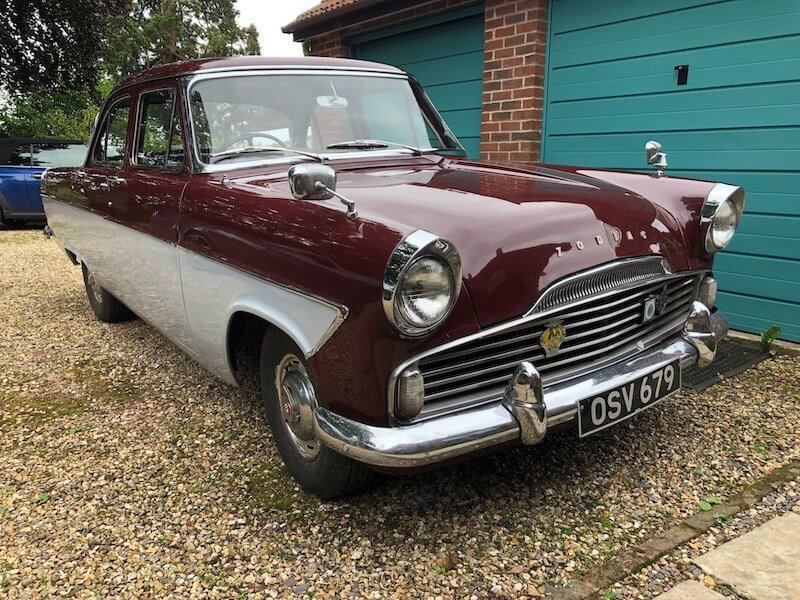 The next day (6 October) H&H heads to its traditional Buxton location with an interesting assembly of cars that goes from Austin 7s to 1990s Mercedes-Benzes. Likely to fire up interest is a 1984 Vauxhall Astra L 1300S in limited edition Celebrity guise. The no-reserve offering has covered 56,000 miles from new and looks the part. An ideal show car for events such as the Festival of the Unexceptional (Link: Internal).

Another fine candidate for that event is a 1976 Humber Sceptre, the Hillman Hunter for those who had a social-climbing ethos. It shows a ‘credible’ 54,000 miles and has had much recent improvement according to H&H. It’s a no-reserve offering.

But enough of such family-saloon fripperies, because even with winter not far off, the diehard enthusiast could still be looking for a sports car. And H&H clearly realises that droptop demand fails to diminish once the clocks change and the nights draw in. 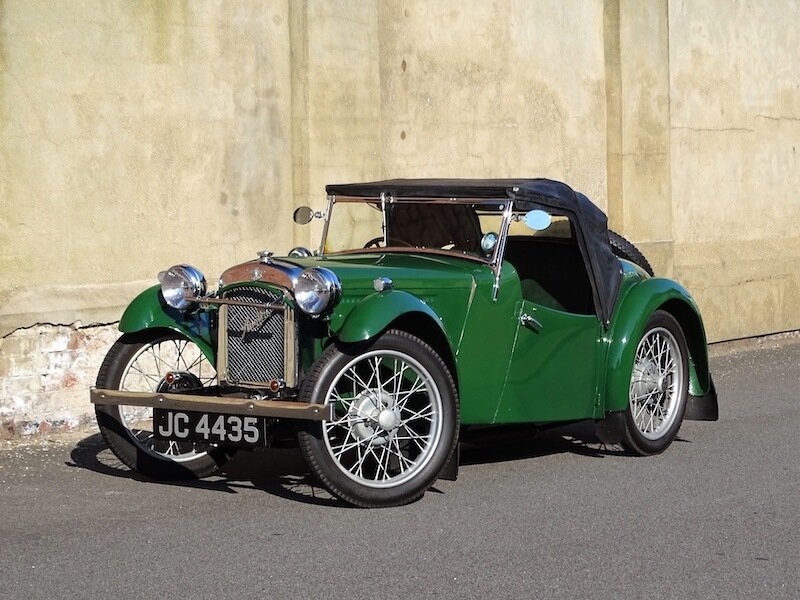 Coming more up to date and offering a seriously heady mix of drop-top, pokey driving is a 1995 TVR Chimaera 4.0 (est: £10,000-12,000) that’s had just two previous owners and covered around 55,000 miles from new. Coming with plenty of history it has had a full engine and gearbox service. 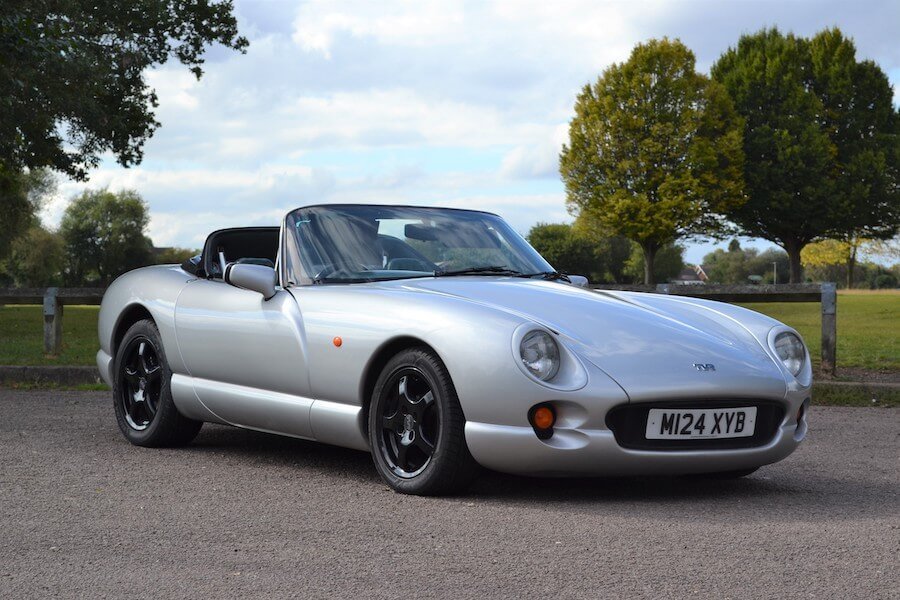 One of the sale’s highlights is a1966 Triumph 2000 saloon that is said, in H&H’s words, to be ‘understood to be the best in the country’. Restored bodily and mechanically to the tune of more than £30,000 the engine, brakes and suspension have been upgraded and overall, it is said to be excellent. It’s estimated at £14,000-18,000.

Heading South from the Peak District to the lushness of the England/Wales border, Brightwells timed online sale finishes on the 28th October.

Triumph TR4s are market favourites – always have been and probably always will be. Recently a few have been to auction and almost all sell, irrespective of their condition. That preamble has a purpose because Brightwells has gone one better than offering not just a TR4A, but a Dove GTR4 (est: £25,000-28,000). Some might not be familiar with the Dove, which in effect was a hatchback conversion carried out by South Coast coachbuilder Harrington. It’s an older restoration coming from long-term ownership, is said to be running and driving and is an ideal use-and-improve candidate. 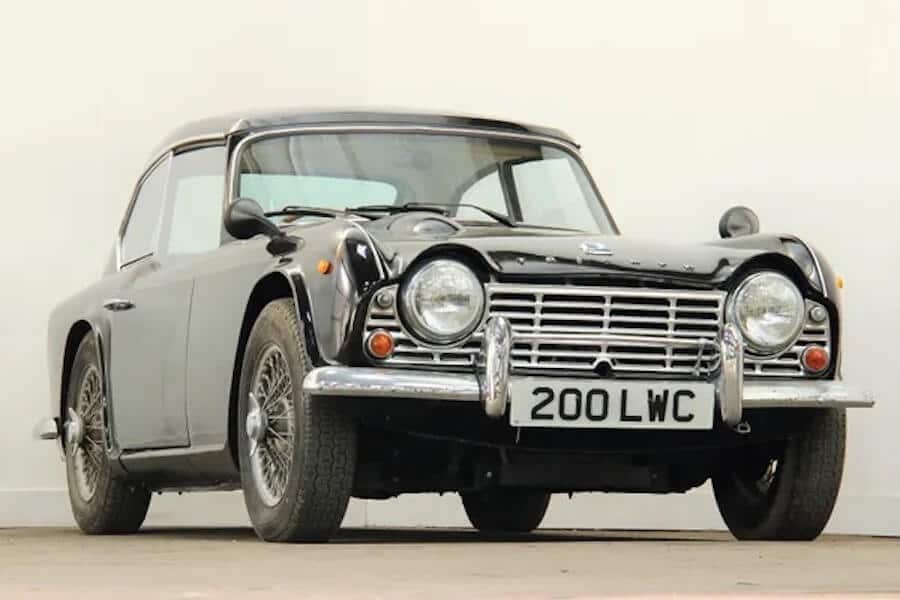 A 1974 Rover 3500 (est: £7000-8000) offers another slice of Ye Olde Albion which is described as a very smart example that’s ready to enjoy. The white body with tan vinyl roof and alloy wheels adds some proper stance while the interior must surely have shocked Rover’s perceived professional middle class buyers: after all, orange – yes, orange – in a Rover? It’s just the ticket for anybody with a love of late-night Soho, dog-track-visiting and weekend runs to seaside chippies, with every bit as much status as a Series 2 XJ: now that IS saying something.

Slowing things down a little is a 1932 BSA three-wheeler (est: £6000-8000) that’s been restored but requires shaking down. While there’s a lot of emphasis on pre-war Morgan three-wheelers the BSA makes an interesting alternative. Basic it might be but that doesn’t prevent it from being fun and exhilarating to drive. 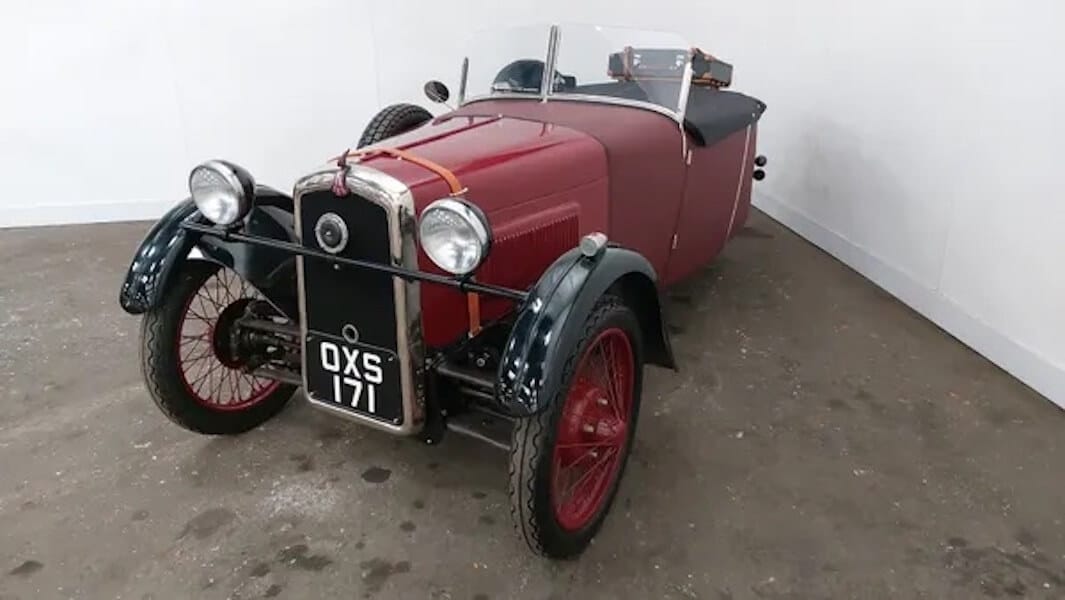 And talking of Morgans (and admittedly it’s difficult to resist a local radio-style link) Brightwells also has a 1960 Morgan (est: £45,000-50,000) that’s been prepared for long-distance international rallies: beneath the piano-hinged bonnet sits a JE Developments 4.2-litre V8 so getting anywhere quickly shouldn’t be a problem.

October finishes off down at Poole, SWVA holding its last 2021 classic sale on the 29th October. It’s an online sale with pre-sale viewing available by appointment. Repeatedly posting 90 percent plus sale rates, SWVA will be looking to repeat that and the mix of cars means that achievement looks set fair for its year-closer. 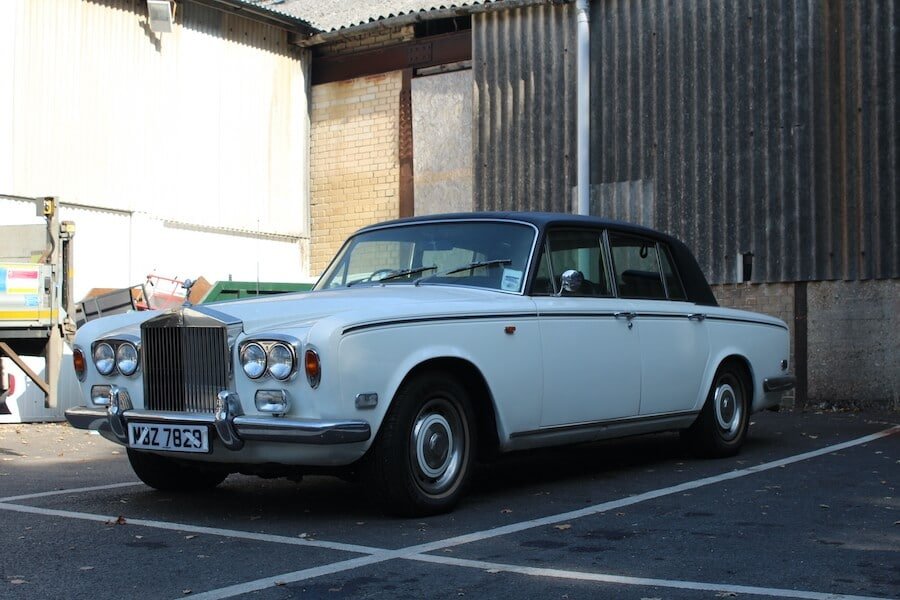 Lots include a 1975 Rolls-Royce Silver Shadow originally owned by Sir Freddie Laker that’s offered as a project as it has not been run for years. With numerous Shadow specialists re-commissioning might not be as arduous or expensive as might be initially thought, especially as it’s a no-reserve offering.

Slightly older (by three years) a 1972 Austin Mini 1000 showing 43,140 miles taps into the ever-increasing interest in BL-era Minis. Once the market only sought out BMC period cars with almost embarrassingly high prices stumped up for 1959 cars. The BL-era cars, once over-shadowed have been increasingly sought out and this one’s £3500-4500 estimate is fair. With one lady owner for 30 years (before which there was one other – her uncle) the vendor has carried out a fair amount of re-commissioning and it’s said to be running nicely. 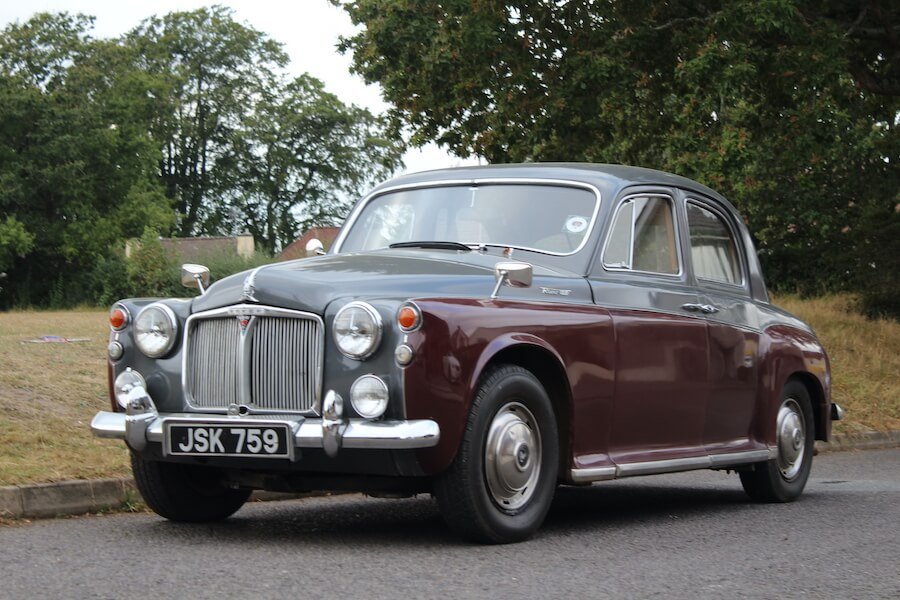 Not far behind in the estimate stakes is a late (1961) Rover 100 that’s given a £2000-2500 estimate. The P4 is one of the classic scene’s evergreen models and they have consistently offered great value for money. To the classic cognescenti their mix of engineering integrity and driver involvement make them a better car than the staid lines suggest. This example has original seating, recent carpets and the wood was re-lacquered five years ago. Re-painted in 2011/2012 later work has included a de-coke, new rear crankshaft oil seal kit, new clutch and new silencer. At the estimate suggested it could be a great value buy.

Some great lots up for grabs so it will be interesting to see what sort of prices they secure.