10 classic and modern-classic cars poised to rise in value. 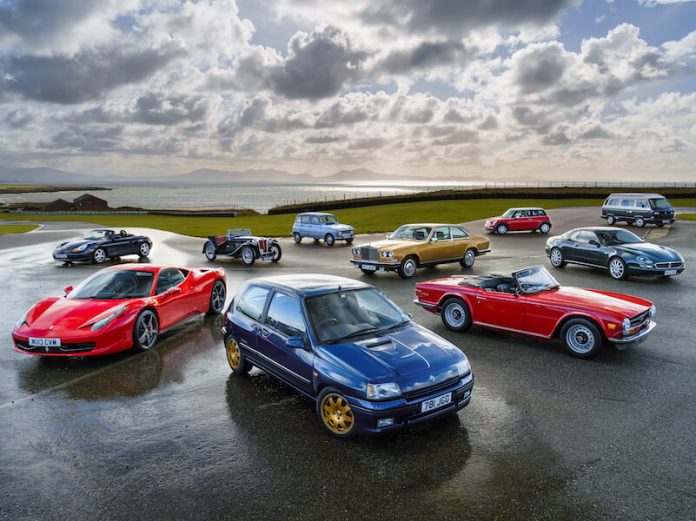 Hagerty has revealed the ten star cars of its 2022 UK Bull Market list. The annual compilation identifies classic and modern-classic cars which offer a pleasurable driving experience while also predicting which makes and models may appreciate in value.

The Hagerty Bull Market is aimed at people who want to find, buy, and drive a classic or modern classic vehicle, with the standout advice being to buy a car they like first and foremost. Should it deliver a healthy return financially, it should be considered an added bonus.

To compile the report, the Hagerty Valuation Team tirelessly analysed value changes from the industry-leading Hagerty Price Guide coupled with sales results and data, looking for indicators to suggest a car is rising in value and increasingly in demand amongst car enthusiasts.

Illustrating how Hagerty stands by its annual selection of covetable cars, the Hagerty Valuation Team reports on the previous year’s selection and compares the cars’ predicted values with the actual values a year later.

The selection of cars in the 2022 Hagerty Bull Market is wide and diverse, meaning there should be a car to suit most tastes and budgets. The 10 identified for 2022 are: 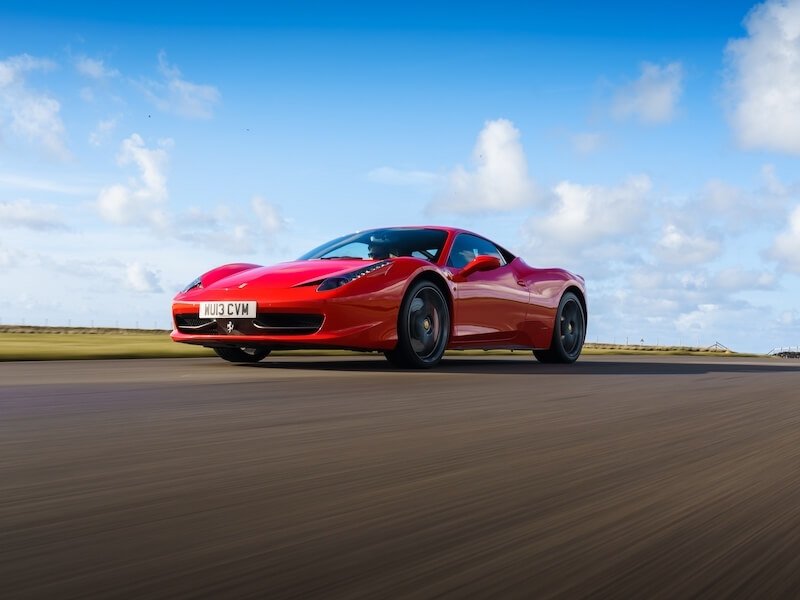 Heralded by many as the end of an era for Ferrari, the 458 Italia was the last naturally aspirated V8 made in Maranello. Pininfarina’s striking styling is clean and dramatic, and with a 562bhp 4.5-litre V8 and rear-wheel drive it offers driving perfection. The 458 can reach 124mph in 10.4 seconds and go on beyond 200mph, and the engine is a masterpiece, being both rich in torque and eager to rev to its limiter.

Is the Ferrari 458 Italia a ‘keeper’ within collector circles? Hagerty has evidence to suggest it is.

Hagerty has seen values of the average value of the cars we insure worldwide increase by 3.7 per cent in 2021 compared with the previous year. Also, there has been an increase in younger buyers: 46 per cent of these owners were born between 1964 and 1981 (‘Generation X’) compared with 34 per cent across all vehicles insured. 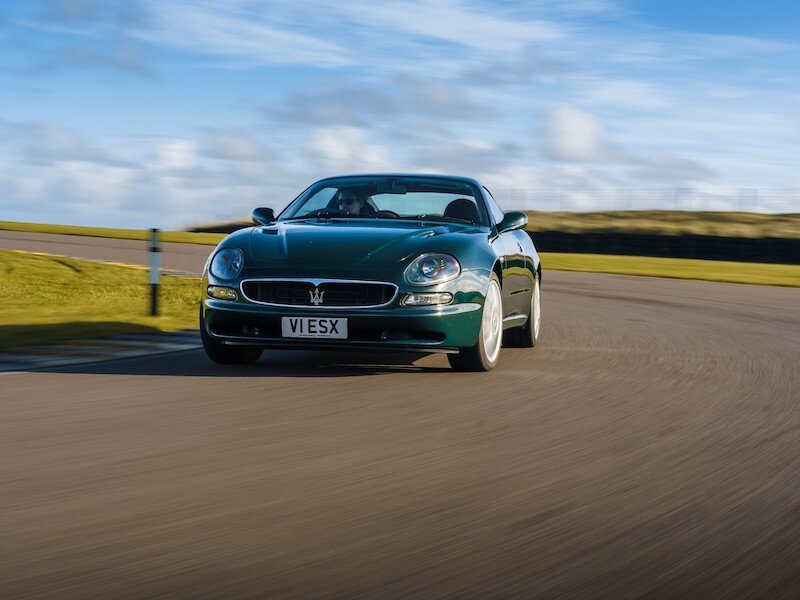 Designed by Giorgetto Giugiaro the 3200 is both elegant and muscular, with signature details such as the boomerang-shaped rear light cluster and the distinctive Maserati trident badge set into the C-pillar. It was a car that encouraged you to share it with the world, even if you knew, in your heart of hearts, that the sensible thing would be to take your £60,000 pot of money and spend it on a Porsche 911 or Jaguar XKR.

The 3200 GT is becoming more common at UK auctions with about a dozen consigned each year, compared with around five a year in 2016, and it has enjoyed a 75 per cent sell-through rate over the past 18 months. Coming from such an evocative marque, and offering such striking design and high performance, the 3200 GT remains a great-value package, for the time being. 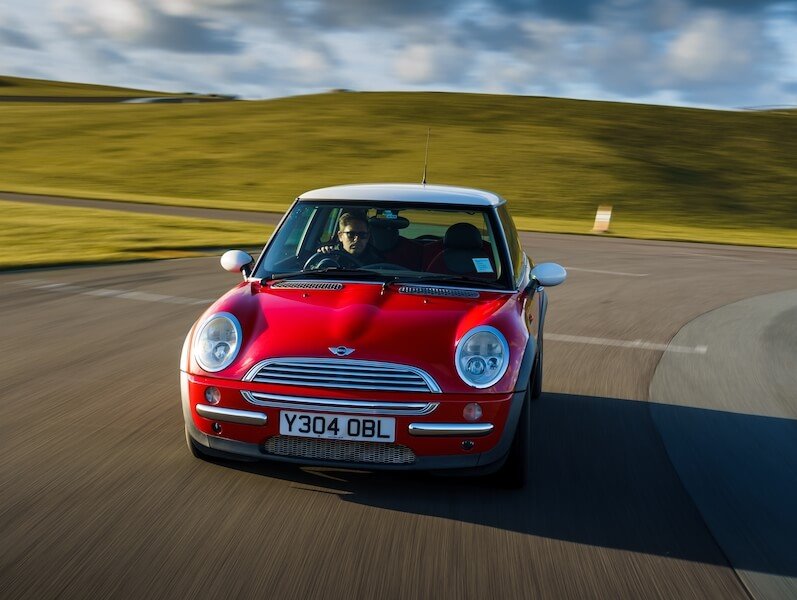 BMW’s new Mini made its public debut at the turn of the 21st century. It offered a delightful homage to the original Austin, no longer quite as mini in stature but still carrying off that effortless, classless vibe that Minis always maintained. Most importantly of all, the Mini was still fun. Whether you opted for the entry-level One or the warm Cooper version it was – and still is – a hoot to drive.

The R50 Mini is another instantly recognisable model and one that Hagerty believes will be increasingly collectable. The data suggests this is already happening: more are coming to auction, with over 40 each year since 2019, with Hagerty tracking a sell-through rate of a huge 92 per cent. 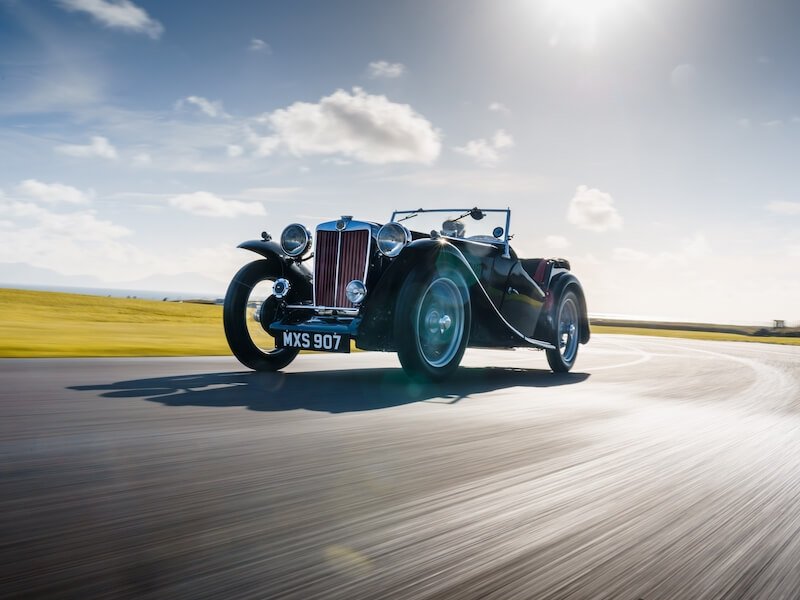 The TB Midget is the rarest of all MG T-series. Launched in May 1939, just 379 were built. Visually it was little different from the two-seater TA roadster of 1936, save for new wire wheels and cooling vents in the bonnet. But the TB enjoyed the introduction of the XPAG engine – smaller than the one it replaced, but a good ten per cent more powerful.

The oldest car in this year’s Bull Market list, the MG TB has been chosen because it potentially offers entry into a host of historic motorsport events. Added to its rarity, this makes it a popular model: 84 per cent of the T Series cars that Hagerty tracked at auction in the last two years sold: that’s above the 75 per cent average. With good parts supply and simple mechanics, this is a terrific entry into the older classic car scene. 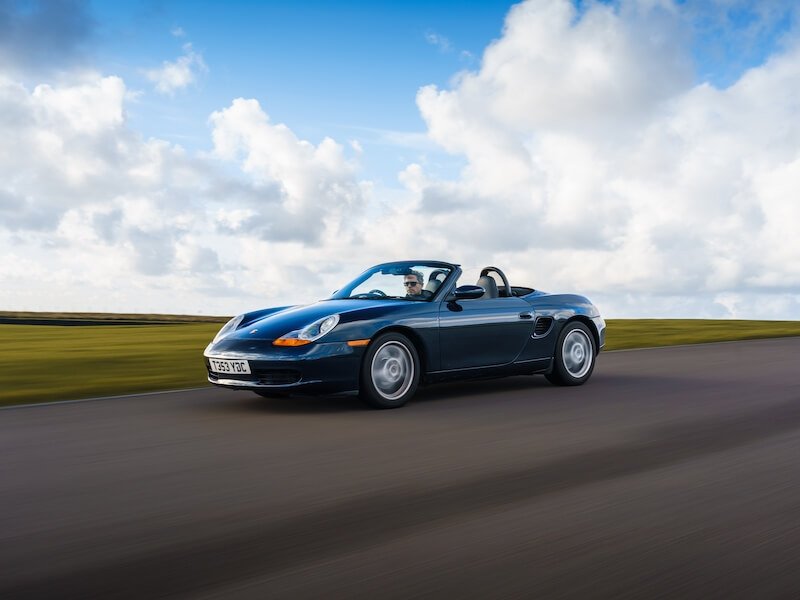 The Boxster, by sharing its componentry with the 996-generation 911 and debuting far more efficient production methods at the company, helped save Porsche. Today the 986 Boxster is seen as one of the most affordable ways to own a Porsche, with many early reviews claiming it to be a better driver’s car than the 911 of the day.

The Boxster is becoming an increasingly familiar sight at auction in the UK. In 2017, fewer than 50 were sold that way, but in 2021 Hagerty reports that number has trebled, to nearly 150 sales. The sell-through rate sits at 89 per cent, too. This indicates that the original, 986 Boxster has found its place with the modern-classic crowd, and a rise in average values of nearly five per cent is further reflection of this. 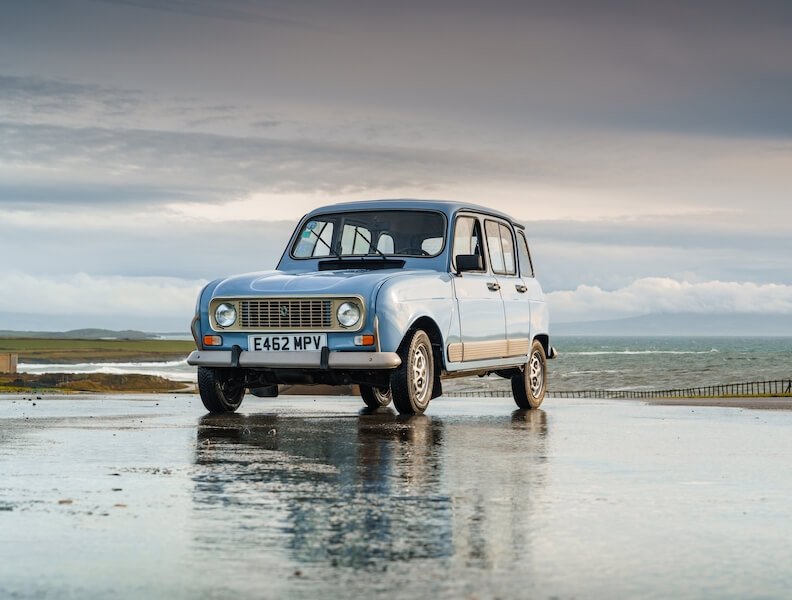 The 4L replaced the post-war, rear-engined 4CV, and offered more of everything: space, reliability, safety, and performance – though its utilitarian style was a matter of taste.

The use of fully independent suspension, much like its 2CV rival, gave the 4L another of its unique characteristics, a wheelbase 45mm longer on the right than on the left. Fortunately the 4L never had the performance to trouble its uneven wheelbase.

The Renault 4 was produced in vast quantities, but not all that many were sold in Britain. It means it’s a rare find for sale in the UK. Over the past two years, values have been driven up by the few that have sold at auction here, climbing an impressive 39 per cent. And with recent auction results exceeding Hagerty’s valuation for a concours condition example, there are no signs that demand is about to let up. 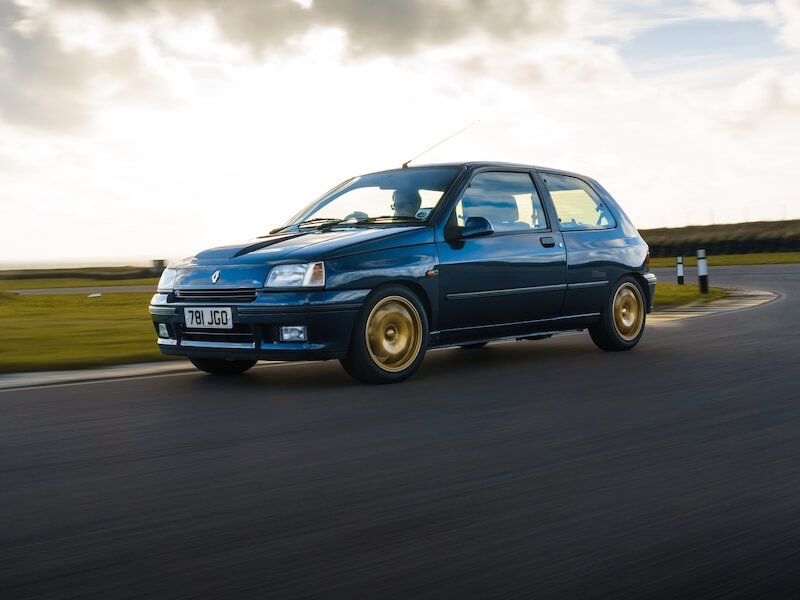 Homologation Special. It’s essentially a more technical way of saying “race car for the road” – or, in the case of the Renault Clio Williams, rally car. The car was wholly developed by Renault Sport and gained the reinforced front subframe from Renault’s Clio Cup race cars, together with revised suspension to include uprated springs and dampers, rear torsion arms and meatier anti-roll bars. The track was widened and those glorious gold Speedline alloy wheels were squeezed under the 16v’s blistered arches. A hot hatch legend was born.

The Clio Williams’ limited production numbers and motorsport heritage make it very collectable. Plus, it’s of the right era: Hagerty has tracked a rise in the values of 1990s homologation cars. It has the potential to follow the trajectory of the 1980s hot hatches such as the Renault 5 Turbo (featured in last year’s Hagerty Bull Market) and the 205 GTI. Recently, Hagerty has noticed examples with over 100,000 miles advertised for prices exceeding our ‘Excellent’ Price Guide value, usually a sign that the market for the car is moving up. 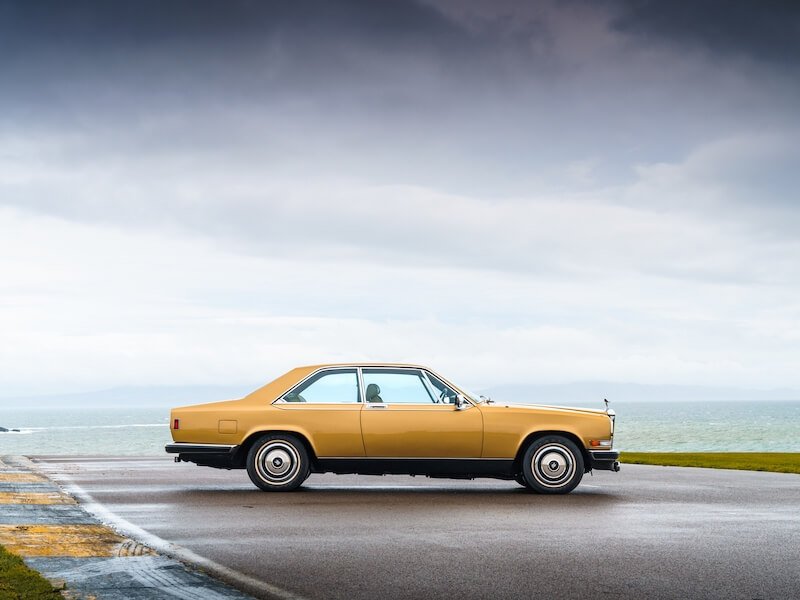 The Camargue, the world’s most expensive production car at the time, was controversial in its day, and because of this it was far from a roaring success. Some 531 cars were built between 1975 and 1986, and when launched it cost £29,250 – equivalent to almost £291,000 in today’s money. To drive, it is wonderfully wafty. The steering is agreeably light, the power brakes quite sharp and the transmission’s focus is purely on providing seamless shifts, not instant response.

Slowly but surely this bold car has been attracting attention all over again. While auction sell-through rates for the Camargue ranged from 46 to 50 per cent in 2015-2016, fewer cars and better examples have resulted in an 83 per cent sell-through rate so far in 2021. In Europe this year, two examples of the Camargue have sold for more than €100,000 and cars advertised for private sale in the UK are priced above the expected Hagerty Price Guide value, an indication that prices may be on the rise. 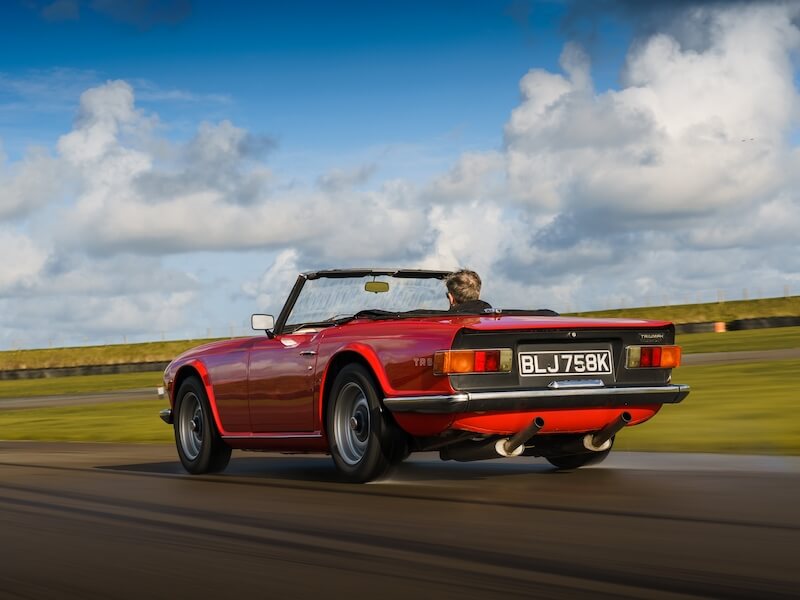 The curves that gave a finishing flourish to the earlier TR4 and TR5, styled by Italy’s Michelotti design house, were chiseled off by Karmann, the German company that had the job of shaping the 1969 TR6. It’s simple, with a relatively big engine upfront, two seats in the middle, a roof you may as well leave down and rear wheels that do the driving. This singularity of purpose means you know exactly what you’re going to get when you slide behind the wood-rimmed wheel, crank the engine, pull up your flying jacket’s collar and give it some gas.

There’s a TR6 to suit most budgets and buyers can afford to be picky, perhaps considering a rust-free car from America. The TR6 was hugely popular there, accounting for the great majority of its 94,000 sales, and cars that have lived in dry states could be a smart buy.

Hugely popular when new, there is a continual supply of Triumph’s TR6 for sale, yet despite this the Hagerty Price Guide shows values have increased by an average of nearly 13 per cent over the last 24 months. And with sell-through rates of 82 per cent, at auction, the TR6 seems a sound investment. 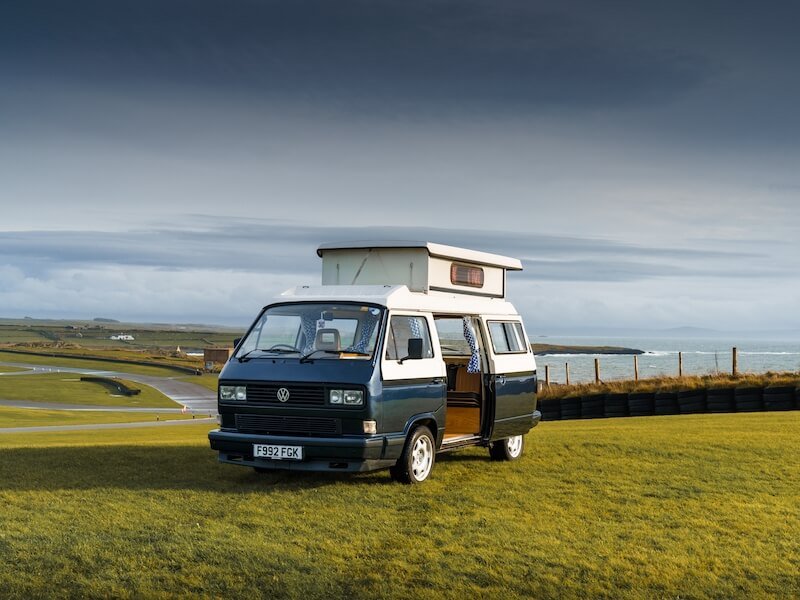 Marketed under numerous names, but known as the Transporter in Europe, the T25 was the third generation of Volkswagen’s practical rear-engined working vehicle and was introduced in 1979. Family lineage to the “bay window” Type 2 was clear to see, but its squared-off detailing brought the new van more in line with Volkswagen’s contemporary passenger car range. Some air-cooled motors made it across, but while the engine was still mounted at the rear and drove the rear wheels, the T25’s main advancement from 1983 onwards was water cooling (still in boxer formation), and later the use of inline diesel power, both naturally-aspirated and turbocharged. Modifications are rife.

Hagerty has tracked values of the earlier ‘bay window’ and ‘split screen’ campers, recording a significant increase over the past few years, a trend that the rise in ‘staycations’ during the pandemic has helped to maintain. Hagerty believes that, compared with the earlier versions of the VW camper, the T25 presently offers a great deal: whilst not as pretty, it has improved handling and crash protection and the earlier versions even maintain the air-cooled charm.

John Mayhead, Editor of the UK Hagerty Price Guide, said, “Every year, our Valuation Team identifies those cars that we believe currently offer great value for money and will be enjoyable to own. We look at cars to suit a range of budgets and offer different driving experiences; this year we’re proud to include everything from a pre-war car that can be raced and a camper van for family weekends to a more modern Ferrari. Hagerty’s huge range of data is analysed, from the values of the 2 million vehicles we insure worldwide through to auction data and information from our partners in the trade. Spotting these automotive gems is always a highlight of our year.”