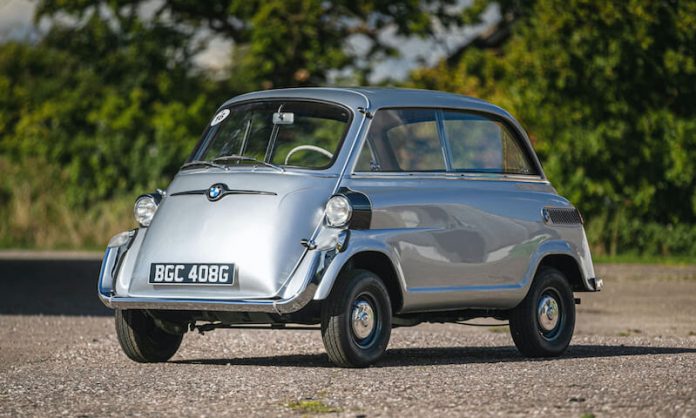 The BMW Isetta ‘bubble car’ in which Sir Stirling Moss taught his son Elliot to drive and the semi-lightweight ‘65 E-Type Roadster which he raced will both go under the hammer with Silverstone Auctions at the NEC Classic Motor Show in November.

The name of F1 legend Sir Stirling Moss is not often linked to bubble cars, but in fact he owned one and even taught his son Elliot to drive in it. This car with its deep bi-generational links to the Moss family is for sale at £50,000 – £60,000 with Silverstone Auctions on November 12th – 13th.

Yes, Sir Stirling Moss actually owned a BMW Isetta 800. It was his car for nipping around in London. At the Goodwood Revival in 2021 it joined some of his greatest racing cars as part of a celebration of his life. 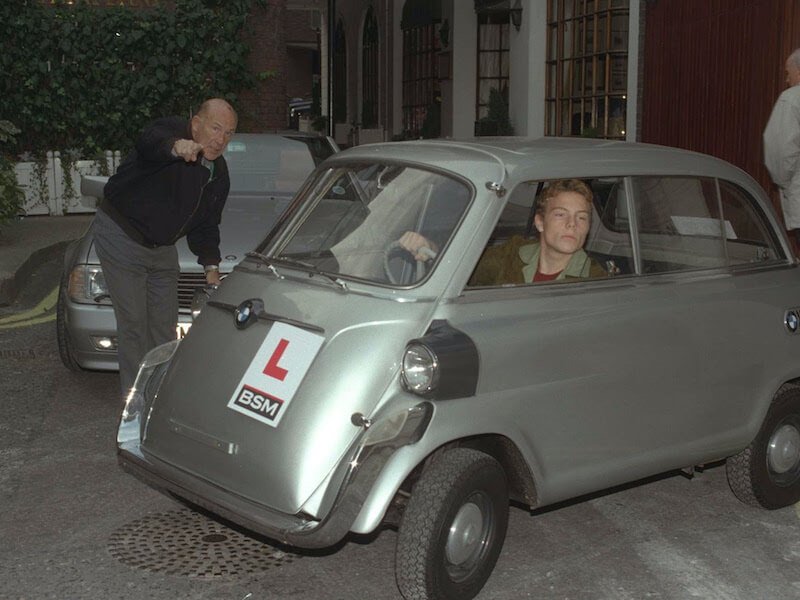 The Italian-designed Isetta microcar was built under licence in a number of different countries, including Spain, Belgium, France, Brazil, Germany, and here in the United Kingdom. Produced in the post-World War II years, a time when cheap short-distance transportation was most needed, it became one of the most successful and influential city cars ever created. Because of its egg shape and bubble-like windows, it became known as a “bubble car’, a term later used to encompass a wide variety of similar vehicles.

With space for two and their luggage, the Isetta was perfect for the UK’s urban and rural roads and, in 1957, Isetta GB began producing the 300 model at their factory in Brighton under licence from BMW. The British cars were right-hand drive with the opening front door hinged from the right hand side of the car and the steering column moved across to the right as well. This meant that the driver and engine were on the same side, so a counterweight was added to the left side to compensate. Lucas electrics replaced the German Hella and Bosch components, a different headlamp housing was used and Girling brake components replaced the ATE brake parts.

However, with only two seats, the Isetta’s market, particularly in Germany, was limited and BMW felt that they needed something larger. Management had already committed to making an entirely new model – the 700 – and resources were limited, so the decision was made to create a lengthened Isetta for the time being until the 700 arrived in 1959. Deriving its name from the BMW R67 motorcycle-sourced 700cc ‘boxer’ engine, the four-wheel 600 looked just like other Isettas at the front but featured a new perimeter frame and the first ever use of semi-trailing arm suspension on a BMW motorcar. A second row of seats and a right-hand side door added space and usability. The resultant design, with some input from Michelotti apparently, was clean, well-presented, well constructed, and reasonably quick and, with a wheel at each corner, handled well. It was rather expensive, however, costing more than a new Beetle and consequently sold in limited numbers as customers awaited the arrival of the more conventionally-shaped 700 in late 1959. 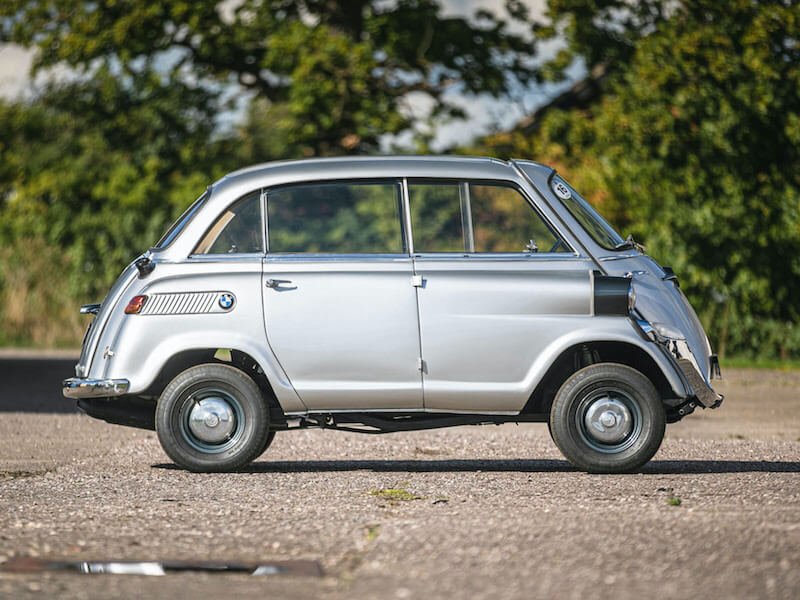 The stunningly presented BMW Isetta on offer here is indeed one of those 600 models and enjoys some remarkable provenance. It was bought by the late Sir Stirling Moss at a Beaulieu auction in a rather sorry state and, once acquired, Sir Stirling set about a restoration with his chosen Isetta specialist. Well known for his love of gadgets, innovation and experimentation (the majority of his road cars were tweaked and improved), Stirling decided that the 600 would benefit from a bit more power and, with his legendary charisma, talked BMW into parting with a 700 engine (an enlarged version of the flat-twin used in the R67 motorcycle offering 697cc and over 30bhp) which was duly slotted in to the little Isetta. There is a letter in the accompanying history file from Stirling to the next owner confirming he asked BMW to help him with the engine. When the rebuild was complete, Stirling used the car around London and his son, Elliot, learned how to drive in this very car as you can see in the accompanying photographs.

The restoration finished in the summer of 2021 and we understand that over £30,000 has been invested over the years which we wouldn’t doubt given the sheer quality of the result. Once the restoration was finished, the Isetta was included in the Sir Stirling Moss parade at the 2021 Goodwood Revival as a tribute to the great man and, in 2022, the car featured in an ITV television show called ‘The Car Years’ in which it was selected to argue the case for the best city car in 1957 against a rival Fiat 500.

By way of contrast alongside the bubble-car, in the same sale, is another car associated with Sir Stirling. A semi-lightweight 1965 Jaguar E-Type Roadster which still carries with it the patina and glamour of racing in its elegant frame, estimate £120,000 – £150,000. 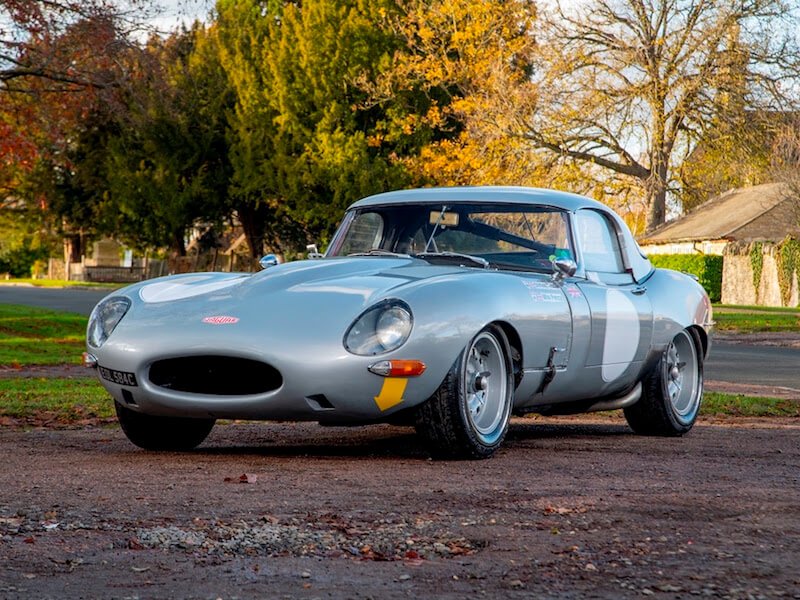 Built to ‘semi-lightweight’ specification complete with an original ‘Works’ aluminium bonnet reputedly from one of the two factory special order semi-lightweight cars. And now lightly restored and in ‘fast road’ tune.

Sir Stirling was full of praise for the car, comparing his laps of the TT circuit in the E-Type with his races in earlier years on the Island’s British Empire Trophy course, saying “The car was pretty good but it needs to be damped down a little, made more taught if we were going to try really hard! It handled nicely, behaved quite well, and was comfortable”

The renowned E-Type specialist Jeremy Broad prepared 1E11338 for competition use at his Jaguar Competition Workshops not far from Browns Lane. Broad followed the specification of the only two special order semi-lightweight cars constructed by Jaguar Works in 1964.

Purchased in 1991 by Manx Motor Racing Club director Graham Warwick and registered in the IoM as 1E MN, Ch. 1E11338 – as a result of Stirling Moss’s observations – was further developed by the legendary Peter Lander and Jaguar engineering experts Pearsons Engineering – probably the world’s most famous preparers of C, D and E Type Jaguars for almost 60 years. Warwick then won the Manx Classic sports car event outright in this car. 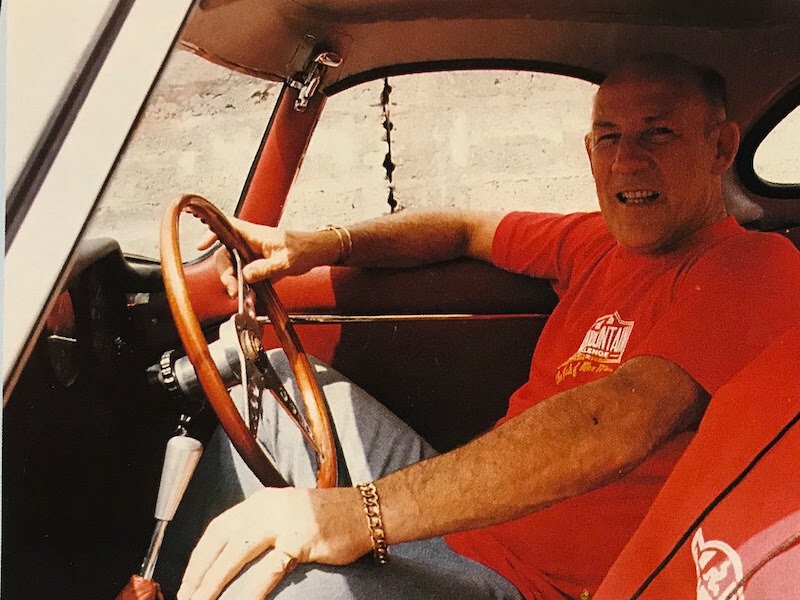 During this period the car was used to celebrate the 30th anniversary of Jaguar’s masterpiece, being driven by Sir Stirling Moss in the inaugural Manx Mountain Challenge of 1991, and then driven in the road rally from the IoM to Silverstone, demonstrating this car’s versatility 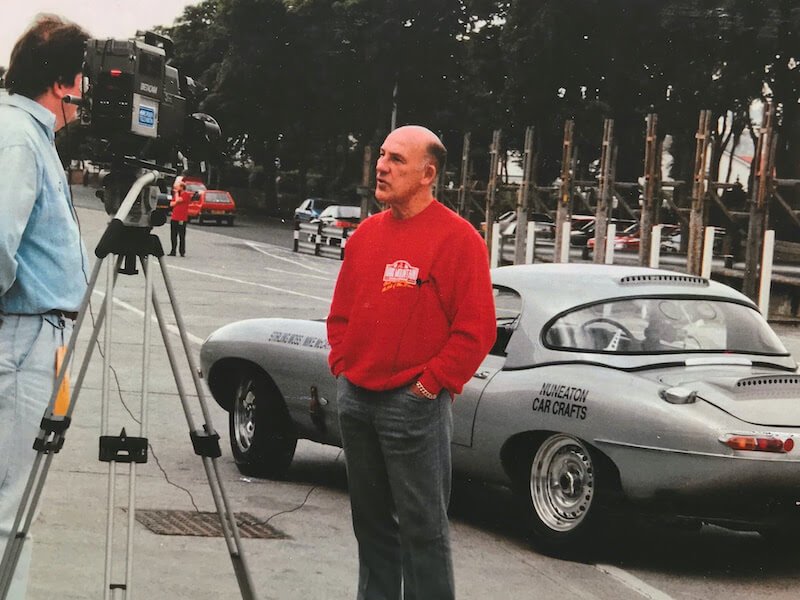 A decade after Sir Stirling’s time with 1E11338, the car was invited to Donington Park to celebrate the 40th anniversary of the E-Type, and was this time driven by Le Mans and British/World Touring Car star Win Percy who left his D-Type in order to drive this car. 1E11338 also appeared nationally and internationally inc at Jarama, Madrid.

The final Silverstone Auctions sale of the year will be held as part of the Lancaster Insurance Classic Motor Show at the NEC on 12th November.