Auto NewsThe Who VW Beetle and 'Magic Bus' go on sale with Silverstone... 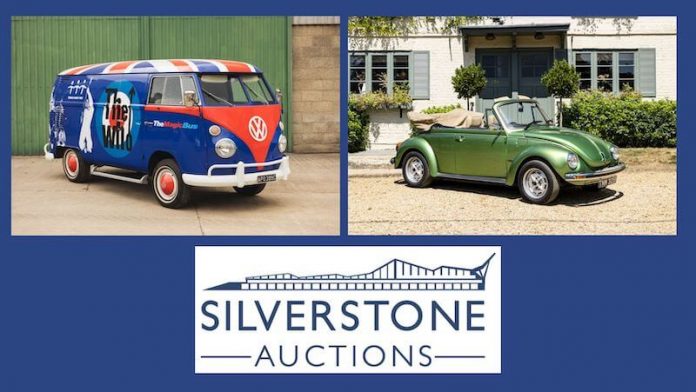 Fans of ‘The Who’ rock band are in for a treat at the Silverstone Auctions sale on August 27th.

Roger Daltry, the lead singer’s VW Beetle cabriolet and the band’s bus – the Magic Bus – come to sale. If ever you wanted a piece of rock-auto memorabilia this is your opportunity and in the case of the bus a chance to raise funds for the Teenage Cancer Trust.

The 1977 VW Beetle 1303 LS Cabriolet was formerly owned from new for almost 30 years by Roger Daltrey CBE, founder and lead singer of The Who, legendary rock band of the 1960s. The car is accompanied by a signed letter from Daltrey confirming that he owned the car for that period. Also in the history file is a Volkswagen Museum Certificate which confirms the specification above, a build date of 27th January 1977 and that the car was UK-delivered. It also confirms the original colour scheme of Viper Green Metallic paintwork with a Pale Sand hood. 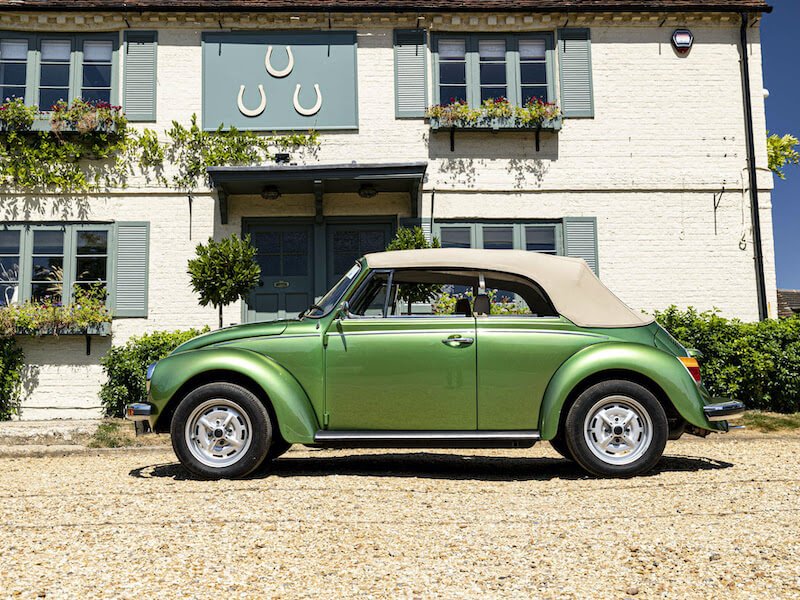 The VW Beetle has benefited from diligent ownership since 2005, being regularly serviced and maintained. In 2014 the Karmann bodywork receiving a full bare metal respray in the original factory colour of Viper Green, whilst there are still in situ Cibie Oscar driving lamps fitted during Daltrey’s ownership. The previous owner also had the seating and door cards fully re-trimmed in beige leather, with perforated centre panels.

During the penultimate service while in Daltrey’s care the original service book was misplaced, and so the servicing history for this period is substantiated solely by his signed letter. Accompanying the car is an original book pouch, containing a period owner’s manual, the authenticity certificate from Stiftung AutoMuseum Volkswagen, some old MOT certificates and previous V5 documents. A 2005 newspaper article from when Daltrey sold the car is also included, along with his signed letter to the buyer at the time. 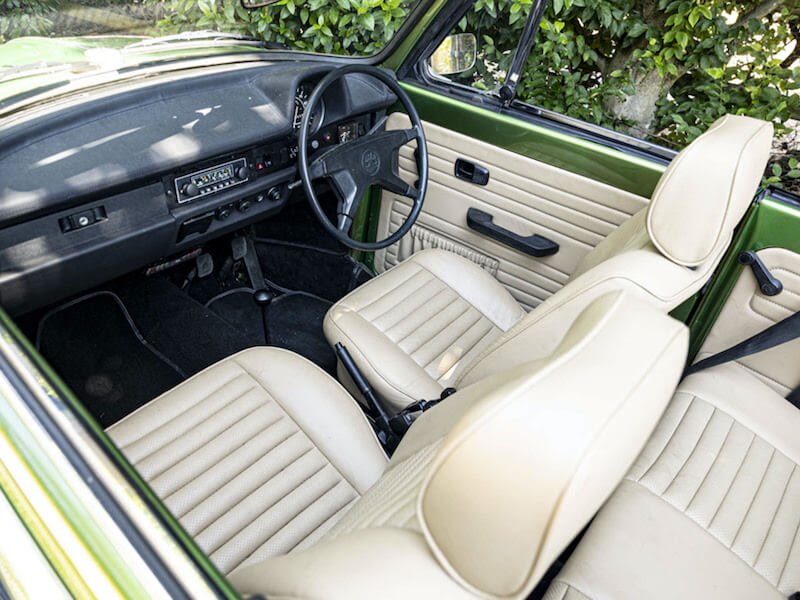 The vendor is a big fan of The Who, enthusiastically buying the car in 2019, and has since kept up its conscientious custodianship. He has lavished over £10,000 on this very deserving car, primarily to get it back to its original specification, saying: “the car is now as near to as it was when it left the factory as I can get it; it’s in great nick, not Concours but very good.”

Also offered is a unique opportunity to purchase The Who Magic Bus – a true piece of modern pop culture fully endorsed by the band to raise funds for the Teenage Cancer Trust. 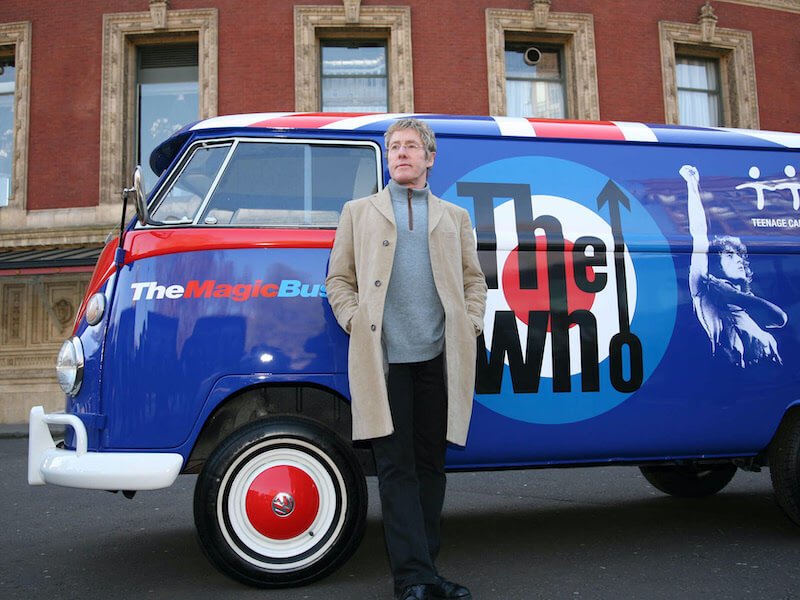 In 2007, Volkswagen’s 60th Anniversary celebrations in Hanover included a concert by The Who, whose set featured a performance of their 1967 hit, ‘Magic Bus’. Although not about a Volkswagen, this classic track has become an anthem for all VW bus owners, and after the event the plan to create a ‘real’ magic bus was set in motion.Lead singer Roger Daltrey is a long standing patron of the Teenage Cancer Trust, and with the help of Volkswagen Commercials AG, which donated the vehicle, the idea of creating a ‘Magic Bus’, which would be raffled to raise funds for the charity, became reality. The competition to win the bus aroused worldwide interest and raised over £30,000 for this very worthy cause.


The ‘Magic Bus’ is a 1965 Type 2, T1 left-hand drive panel van, which was sourced for Volkswagen by Bob Van Heyst, of BBT in California. Already partially restored by its previous owner, the Type 2 was transported back to its birthplace in Hanover, where the restoration was finished by VW specialists in the famous ‘Old Timer’ workshop. The bus then received its amazing custom artwork, which was executed by renowned graphic artist, Richard Evans. Richard is The Who’s art director and has worked closely with the band for over 40 years on album covers and tour designs. Applied at the Volkswagen factory in Hanover, his images adorning the Magic Bus depict The Who’s soon to be 60 year career at the forefront of popular music. In addition, Roger Daltrey and lead guitarist Pete Townshend have autographed the sun visors, whilst Richard Evens signature can be found on the interior side panel. 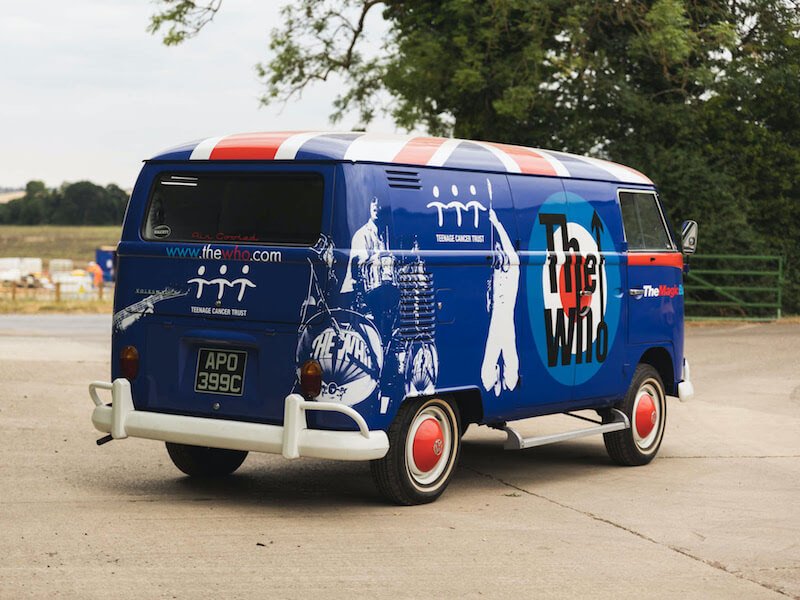 Its unique paintwork aside, the ‘Magic Bus’ is mechanically standard and fully road legal, while the dashboard is in its original ‘un-chopped’ form. The ride height remains unaltered and the vehicle, which has the classic 1,600cc single port engine, is reported as comfortable to drive. Exported new to the USA in 1965, the bus still boasts its American specification ‘towel rail’ bumpers and ‘elephant ear’ wing mirrors. Features incorporated include the rock and roll rear seat, which folds down into a full- width bed with storage space underneath; a JVC CD stereo system with iPod and Bluetooth functionality, four Ministry of Sound speakers; and seven twin-anchor-point seatbelts. In appropriate 1960s style, the seats are upholstered in pale blue leatherette and embroidered on the backrests with The Who’s iconic target logo. The additional ceiling locker is finished in red, white and blue, while the flooring consists of black and white vinyl tiles.German model-makers Schuco produced a highly sought after limited edition 1/43 scale model of the ‘Magic Bus’ with Revell producing a detailed 1/24 scale kit in 2021, additionally there are numerous ‘unofficial’ items of merchandise available. The Magic Bus is well known and has featured at many events in the UK, picking up awards and enjoying multiple invitations to appear all over the country. It has also featured in magazines and books including the Volkswagen Camper and Commercial Magazine (Issue 37);The Chelsea Art Club’s 2009 yearbook; and Camper Van Tastic.


Described as in generally very good condition, the Magic Bus is offered with a VW Certificate of Origin, current MOT/tax and Swansea V5C. Instantly recognisable, this is a unique vehicle that makes Ferraris and their ilk seem commonplace. It also turns heads like no other, continually eliciting waves and the ‘thumbs up’ from fascinated passers-by. Few, if any, vehicles will prove more fun to drive. In current ownership since 2012, the bus has been used by our vendor for further fund raising for the Children’s Cancer Trust, has been serviced regularly, kept in dehumidified storage and is running and driving very well.