The private registration included in the sale. 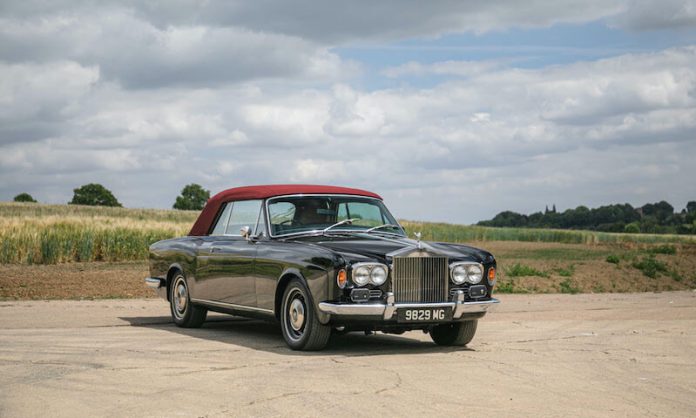 The next Silverstone Classics Auction on August 27 will not be short of glamorous cars and none more so than this beautiful classic 1973 Rolls-Royce Corniche owned for three decades by Maurice Gibb of Bee Gees fame and his family.

Arwel Richards of Silverstone Auctions, who consigned the car, comments: “When Rolls-Royce launched the two-door version of the Silver Shadow in 1966, the international jet set began to clamour for attention at the dealerships. These hugely desirable motor cars began to change hands at significant premiums over list price and one can imagine the hushed negotiations over the green baize of the gaming tables at Crockfords and Aspinalls.”

The Drop Head Coupé that followed in 1967 was even more exclusive, and waiting lists ran for years. Rolls-Royce could not have predicted the Swinging Sixties, or those who profited from this new era, and demand for the convertible came from all strata of monied society, the most vocal of which were heard on the radio. It was practically a law that celebrity Rolls-Royce owners had to be pictured alongside their car, and the convertible Rolls was the most coveted of all. 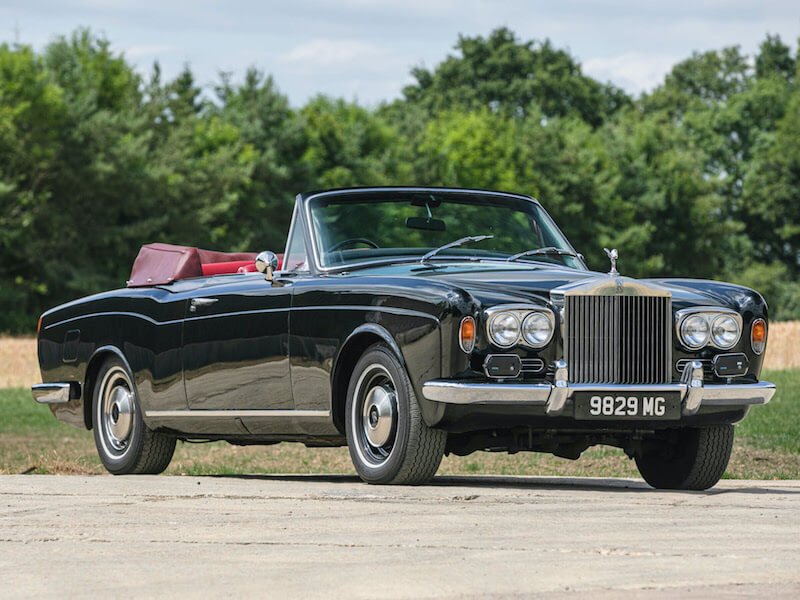 If there was one band that defined this new era of disco it was the Bee Gees, providing not one but three headline tracks to the quintessential disco film of the 1970s, Saturday Night Fever. One song, Night Fever, is often played as the anthem of the decade. As one third of the Bee Gees, Maurice Gibb was one of the most successful and highly paid of the era, enabling him to indulge his passion for Rolls-Royce motor cars.

By the late-1970s, demand for the Corniche Convertible, as now named, was even more ferociously high than the previous decade, and second hand cars were highly sought after, impatiently in demand by the super rich. These sums are often mythologised and exaggerated but the accompanying carbon copy Bill of Sale from 1979 confirms these eye watering prices. When Maurice Gibb walked into the H.R. Owen showroom at Melton Court in South Kensington on the 17th April 1979 and saw this 1973 Rolls-Royce Corniche Convertible in Masons Black with a St. James red leather interior showing 30,214 miles, he parted with the incredible sum of £35,000. Bearing in mind that this was a six-year old car with 30,000 miles, he paid over three times the car’s list price when new, or double the price of a contemporary Ferrari 308 with change left over for a brand new Ford Capri! 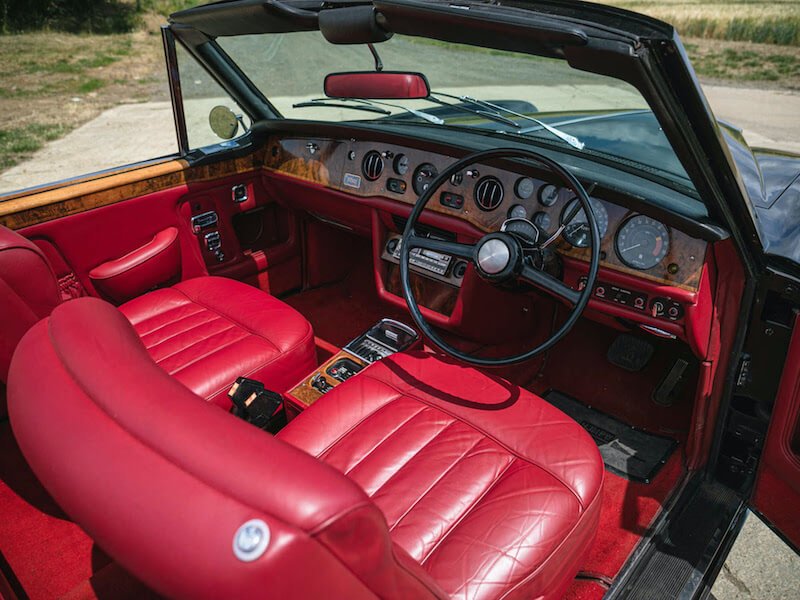 Maurice Gibb’s love affair with the Rolls-Royce started in the 1960s, famously photographed with the band looking through the window of Jack Barclay’s Mayfair showroom in 1968, various period snaps show Mr Gibb impeccably tailored in white alongside a Cloud Convertible or astride the bonnet of his Silver Shadow. Perhaps it was either his affection for this Corniche or the desire to get his money’s worth that saw the car remain as part of his collection until his sudden passing on the 12th January 2003, with the car remaining in the family until 2012. Those familiar with “celebrity cars” may note that most cars only enjoy a few years of ownership until traded in against newer models, and a thirty-three year family connection is very rare. So beloved was this Corniche, that Mr Gibb was photographed arriving in the Corniche at a press junket in 2001, gallantly aiding his wife Yvonne out of the rear seat, copies of which are on file.

The car was nicknamed “Rosie” and the private registration “9829 MG” issued to the car in period, and generously included in the sale, as are the monogrammed over-mats. The Corniche’s current V5C show a number of previous registered keepers, which included Mr Gibb personally, his company and family members. An accompanying declaration on file, signed by Mr Gibb’s brother-in-law and personal assistant of thirty-years is dated 23rd July 2012 and confirms the car’s history. This declaration states regular servicing and MOT records show that the car’s mileage in July 2012 was 48,013 miles. Under new ownership, the Corniche benefited from some £24,000 of maintenance and servicing by Royce Motor Services of Gloucester between 2012 and 2019. 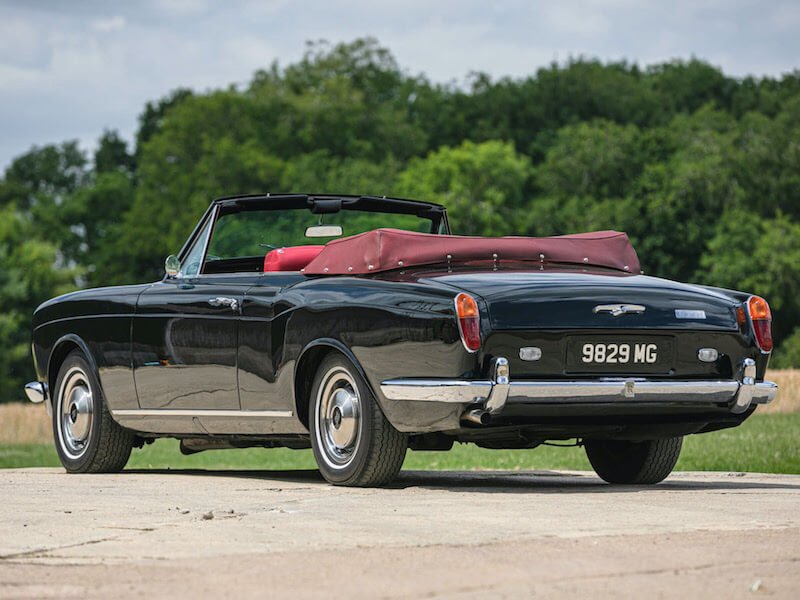 Purchased on the 8th June 2021 by our vendor from a leading Rolls-Royce specialist, a purchase he readily agrees was on impulse, the car joined his fleet of modern motor cars, many of which are current model Rolls-Royces, and as an international businessman with limited time for classic motoring, his Lamborghini Miura would take precedence over the rest of his Collection. With recent expenditure of £10,000 the Corniche is presented to auction with an upgraded interior, dark red mohair power hood, a mileage of some 52,000 miles at the time of cataloguing and a history file that includes not only the aforementioned carbon copy Bill of Sale and signed declaration, but a note from a chap who confirms he use to wash the car for Mr Gibb on a Saturday morning!

Considered the most attractive version of the Rolls-Royce Corniche Convertible, the chrome bumpered cars produced between 1971 and 1977 only number a total of 1,232 in both right and left-hand drive, with very few in Masons Black. Questionable colour combinations of the era have often split opinion but few would argue that this Corniche’s combination is a perfect blend of Seventies retro, sleek black and funky red.

In conclusion, classic cars should be fun, enjoyed by drivers and passengers alike, and we defy anyone not to arrive at a destination with the roof down and a Bee Gees hit blaring, whether the high notes are accurately hit or not.

Join the club:
The International Club for Rolls-Royce and Bentley Enthusiasts

Supercars line up at Goodwood for children’s charity