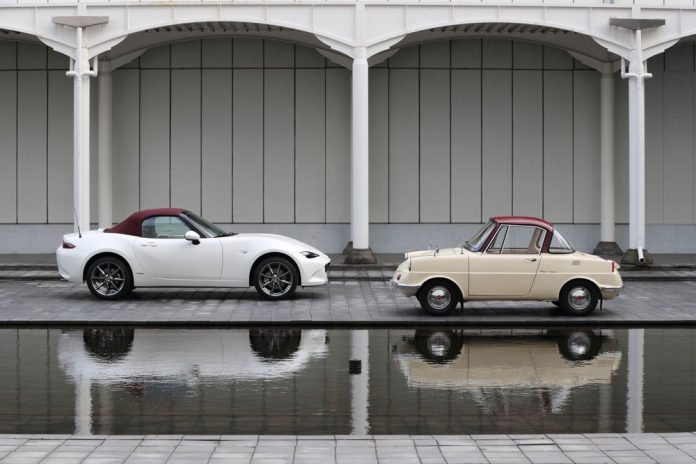 Mazda has decided to celebrate its 100th anniversary with a selection of Special Edition Series models, the cars arriving in the UK in the autumn. There are five models to choose from with a sixth, the CX-5 SUV, arriving later in the year and the number of each allocated to the UK has been strictly limited. Cheapest of the Special Edition Series is the Mazda 2 which costs £20,995 although just five examples are earmarked for the UK. That’s the same number as for the Mazda 6 which costs £33,995 and for the CX-5 that arrives later. More numerous, with 100 destined for the UK, is the Mazda 3 which is fitted with the 178bhp Skyactiv-X petrol engine. It costs £29,995. Another £1700 bags the CX-30 compact crossover which receives the same engine in Special Edition guise. The final model in the series is the MX-5 which is powered by the 184bhp 2.0-litre engine and also costs £29,995.  The 100th anniversary MX-5 also features a roof in Dark Cherry fabric.

Commenting on the 100th Anniversary Special Editions, Mazda UK Managing Director, Jeremy Thomson, said: “Mazda Corporation has created these special models as a token of appreciation for the customers who have supported Mazda through the years. We’ll be proud to have special versions of the MX-5 Convertible, CX-30 and Mazda 3 in our UK showrooms later this year. UK buyers have always loved special edition MX-5s so I’m sure that with its distinctive cherry roof and burgundy interior, the 100th Anniversary Special Edition Convertible will be very popular, while the first opportunity to have distinctive limited-edition versions of our latest cars: the Mazda 3 and Mazda CX-30 is equally exciting”. Customers will receive the key in a special presentation box, along with a limited edition book documenting Mazda’s 100-year history and a 1:43 scale model of the R360.