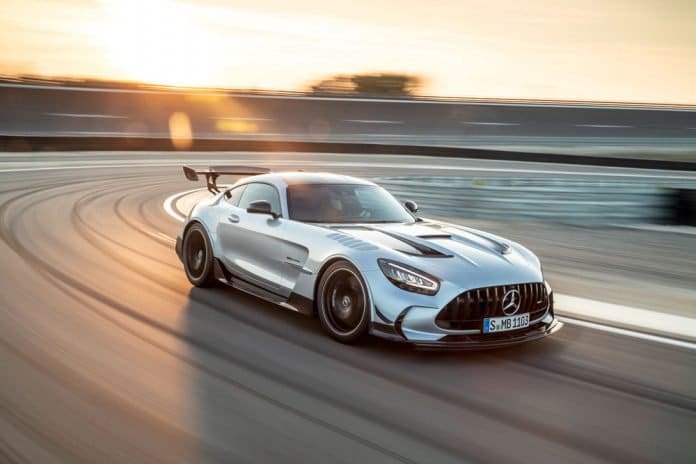 Six years after its launch, the Mercedes-AMG GT is now available in ultimate Black Series form, and with UK deliveries starting in the autumn buyers will have to shell-out £335,000. To put that into perspective, that’s some £145,000 more for the limited edition than the GT R Pro model that arrived in 2019.

That’s an eye-watering sum, but it does buy you a rather special confection, one powered by AMG’s 4.0-litre bi-turbo V8 that produces a stonking 720bhp and 800Nm of torque. The heavily-revised unit features a flat-plane crank and revised firing order, and with each one hand-built it’s claimed to be the most powerful series V8 ever produced by Mercedes-AMG.  The result of all this tinkering is a quite remarkable set of performance figures: 0-62mph in 3.2 seconds, 0-124mph in 9.0 seconds and a top speed of 201mph.

Drive is delivered to the rear wheels via AMG’s 7-speed Speedshift dual-clutch transmission while an actively-controlled AMG Performance exhaust guarantees the appropriate level of aural drama. Adjustable suspension also features, while braking is taken care of by ceramic composite discs clamped by black-painted calipers. The ten-spoke forged wheels measure 19 inches in diameter at the front and 20 inches at the rear.

Unsurprisingly for such a track-focused machine the aerodynamics have also received close attention from AMG engineers. An adjustable diffuser is fitted at the front, while the rear sports a huge rear wing with adjustable elements and a new apron incorporating a larger diffuser. Downforce is a claimed 400kg at 155mph.

The Black Series also benefits from a weight-saving programme that sees the front wings, roof and tailgate fashioned from carbon-fibre. The lightest GT model yet according to the company, the exterior also boasts ventilation louvres in the front wings, a grille based on that fitted to the AMG GT3 race car and bonnet elements in high-gloss carbon-fibre. Buyers will also be able to choose from nine exclusive AMG Magma Beam Paint colours.

Naturally, you’d expect the cabin to be just as special and you’re unlikely to be disappointed by what’s on offer. Alongside the standard AMG Interior Night Package the Black Series also gets an AMG Performance steering wheel trimmed in DINAMICA microfibre along with carbon-fibre door sills.

Also standard is the AMG Track Package which brings a titanium roll cage and four-point seat belts, although those after something less hard-core can opt for the Comfort Package at no extra cost – this replaces the bucket seats with more cossetting heated, memory AMG Performance items. Black upholstery with grey stitching is a no-cost alternative for the Nappa leather/DINAMICA microfibre-trimmed interior.

While production numbers aren’t limited, you can expect very few to come to the UK.