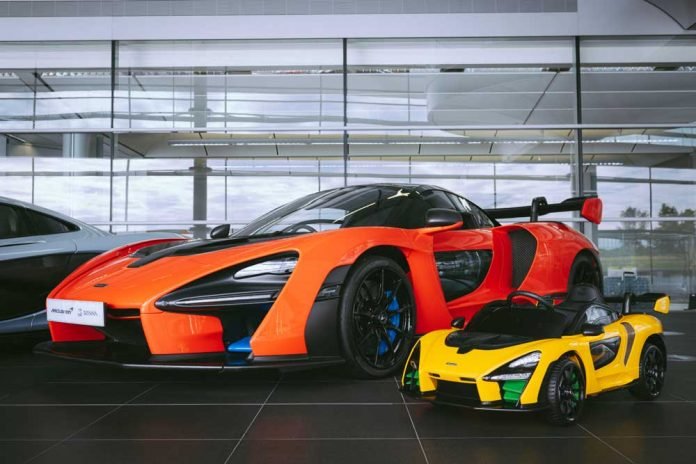 McLaren Automotive has revealed the third vehicle in its range of children models, the McLaren Senna ‘Ride On’. Following on from the McLaren 720S and P1, the Senna ‘Ride On’ is modelled on the manufacturer’s most extreme track car and has been named after the three-time McLaren Formula 1 World Champion, the late great Ayrton Senna. The electrified model features working dihedral doors to allow easy access for the young drivers and has an authentic push-button start, which activates McLaren Senna engine sounds, and a working brake light function.

With an infotainment system that can access files from a USB or SD card, they can also play music in the car for their journeys.

The McLaren Senna ‘Ride On’ is available in five different paint colours – black, white, Mira orange, Vega blue, and Memphis red. A sixth special edition colour – exclusive to McLaren retailers – of yellow with green accents echoes the colours of Ayrton Senna’s race helmet for those who want to emulate the racing legend. Although aimed at three to six-year-olds, McLaren’s Formula 1 driver Lando Norris managed to squeeze into the car and take it for a test drive, just to check he was happy with the way it drove.

British driver Norris recently claimed his first podium finish in P3 in the Austrian Grand Prix, the first race of the delayed 2020 season, and currently sits in 10th place in the Drivers Championship. Priced by McLaren at £375 in the UK, the Senna ‘Ride On’ is available to order at McLaren Retailers and selected toy retailers including Amazon.