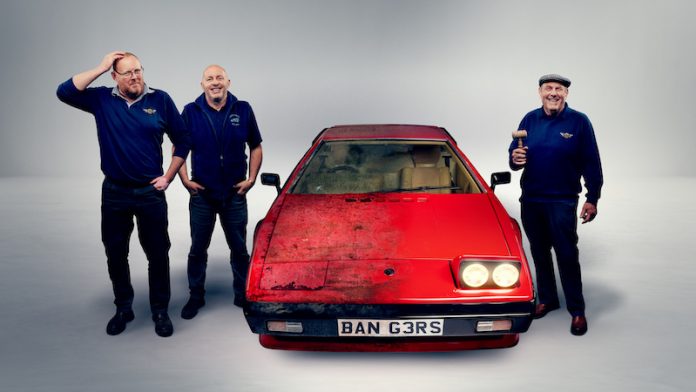 Bangers & Cash: Restoring Classics builds on the success of TV series Bangers & Cash, which follows the everyday dealings of the family-run classic car auctioneers Mathewsons, based in North Yorkshire.

The new series, Bangers & Cash: Restoring Classics, will follow the journey of a vehicle purchased at a Mathewsons classic car auction, before being repaired, restored and then re-auctioned in order to try and find the vehicle a new home and loving owner.

Over six one-hour episodes, genuine restoration projects of varying degrees of difficulty will show how tricky it can really be to restore classic vehicles back to their former glory. The new show sends various vehicles bought at auction to a variety of restorers before returning to be re-sold.

In the first episode of Bangers & Cash: Restoring Classics an Astra GTE that was once red, but is now a lighter shade of pink, gives the Bangers & Cash production team a headache as they try to have the car restored and re-auctioned to make a profit.

But profit proves hard to come by, when, despite having the advice of Derek, Dave and Paul Mathewson, the team can’t help but fall into some of the notorious pitfalls classic car owners face when attempting their own restorations. Parts can’t be sourced, jobs take far longer than anticipated, and the bills soon start to mount up…

After getting carried away at the auction and paying well over the odds, the Bangers team send the 1990 Vauxhall Astra GTE to The Motorist near Leeds for a proper restoration, but the sun-bleached red paint is a costly and time-consuming issue. Work is done on the interior and a rusted wheel arch is sorted out. Despite Derek saying “it’s a credit to the guys who have done it. I think it’s good” the sales estimates don’t inspire much hope of a profit. However, a bidding war at the auction helps push the price towards the top end of the market, but there are still some heavy losses and lessons learned.

Also in the first episode, a 67-year-old moped is sent to Superbike Specialists in Huddersfield to get it going again, and there’s a catch up with a 1965 Mini Cooper S. Although in seemingly terrible shape when dragged out of a shed by Mathewsons to be auctioned in the very first episode of Bangers & Cash, Derek billed it as “the find of the century” and the hammer price was £18,000. Several years on and it is now wonderfully restored, much the delight of its owner.

Other vehicles that feature in the series include a Vanden Plas Princess, a Francis Barnett Polver motorcycle, an MG Metro, a Ford Capri Laser, an MGB Roadster and a Lotus Esprit 3.

The series is on Thursdays at 8pm from 21 July on the Yesterday channel and all episodes will be available to catch-up on demand on UKTV Play.