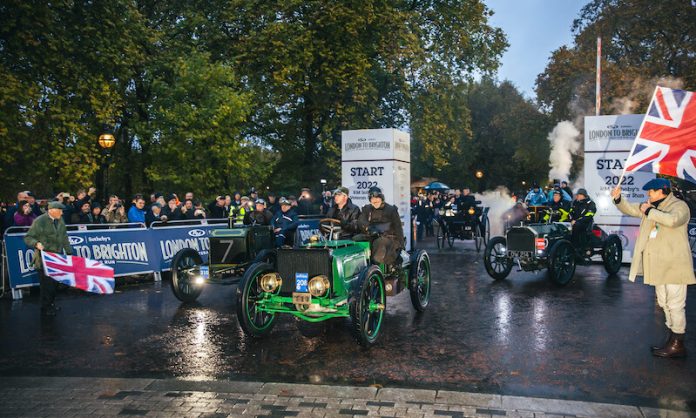 Stormy weather does nothing to dampen spirits as hundreds of pioneering automobiles complete the world’s longest-running motoring event.

Close to 350 intrepid participants in this year’s RM Sotheby’s London to Brighton Veteran Car Run experienced a real insight into the hardships of Victorian motoring, as rain storms swept through the south of England. 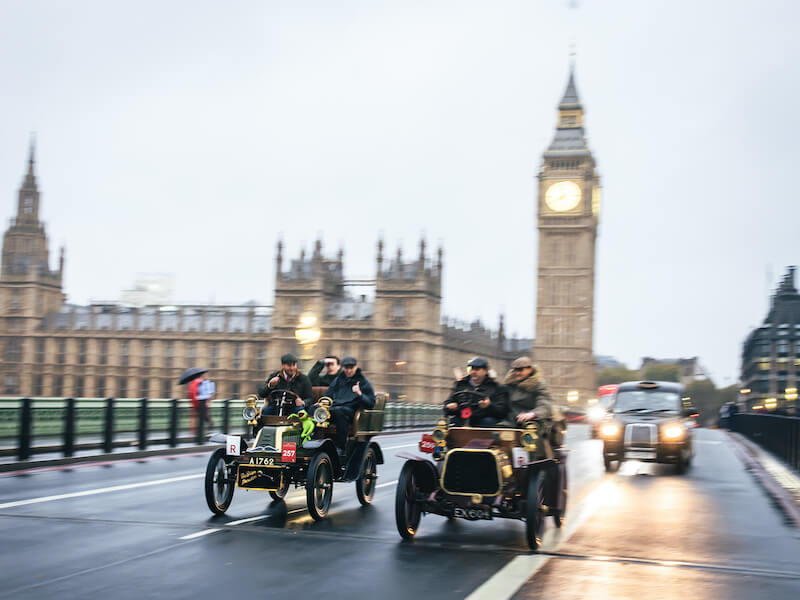 With the vast majority of the pioneering pre-1905 vehicles completely open to the elements, and the rain lashing down, valiant crews faced one of the wettest trips ever in the famous event’s 126 year history. This year’s torrential downpours were in complete contrast to the autumnal sunshine enjoyed 12 months ago.

The 2022 conditions, though, were a reminder of the challenges faced by those celebrating the passing of the Locomotives on the Highway Act on the original Emancipation Run back in 1896. This legislation raised the speed limit for ‘light locomotives’ from 4mph to 14mph and abolished the need for the vehicles to be preceded by a man carrying a red flag.

Adding to their challenge, those plucky pioneers of 1896 not only faced pouring rain but also many unmetalled, muddy roads liberally coated with decades of horse droppings. 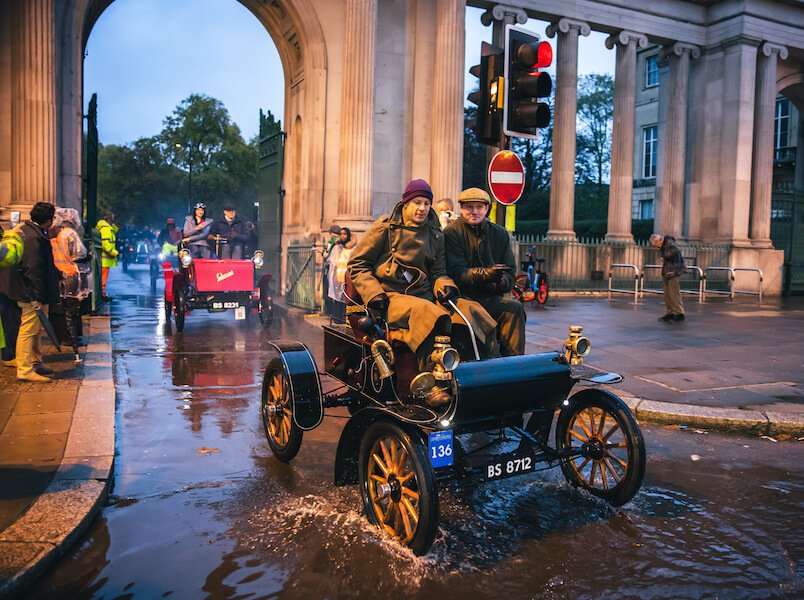 The weather didn’t dampen spirits back then and, while unpleasant at times, didn’t dampen spirits now. Onlookers were impressed by the big grins on drivers’ faces. Undaunted by the lashing rain and flooded roads, more than 300 of the brave-hearted starters valiantly completed the hallowed 60-mile London to Brighton course to claim a very well deserved finisher’s medal.

As is now traditional, the dawn start in the capital’s Hyde Park was preceded by the ritual tearing up of the symbolic red flag. This year, the ceremony was carried out by those driving three fearsome Napiers which were honouring the 120th anniversary of Selwyn Francis Edge’s milestone victory in the 1902 Gordon Bennett Cup from Paris to Innsbruck. Edge’s momentous win, driving one of the Napiers present in London today, was Britain’s first international motorsport success and the origin of British Racing Green. 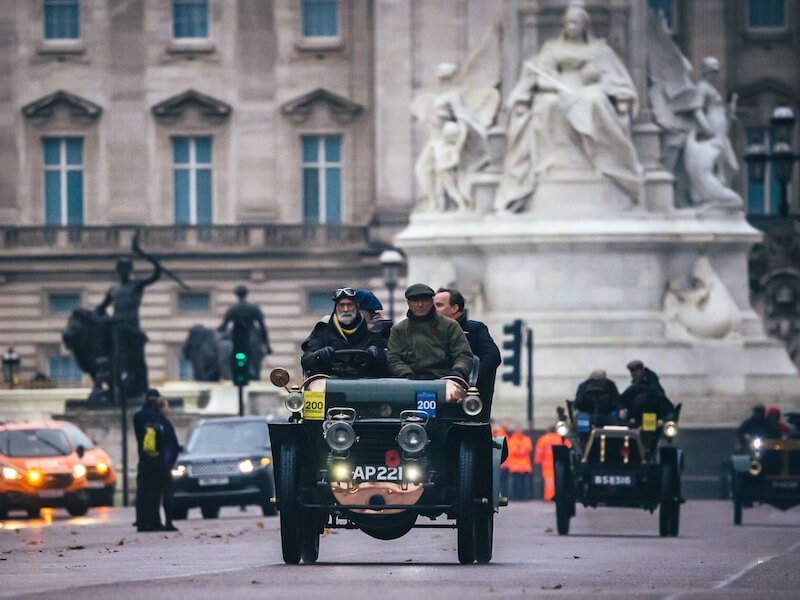 The Napiers – driven by Evert Louwman of the Louwman Museum, Doug Hill of the National Motor Museum at Beaulieu and Martin Chisholm, driving the 1902 victor now owned by Daniel Sielicki – were also given the honour of being first away from the start at daybreak.

Other early London to Brighton starters included former F1 driver Max Chilton at the tiller of the 1901 Pope Waverley entered by Harrods, comedian Rowan Atkinson aboard the remarkable 1893 Salvesen Steam Car, and HRH Prince Michael of Kent, President of the Royal Automobile Club, driving the 1903 Daimler owned by the Jaguar Daimler Heritage Trust. 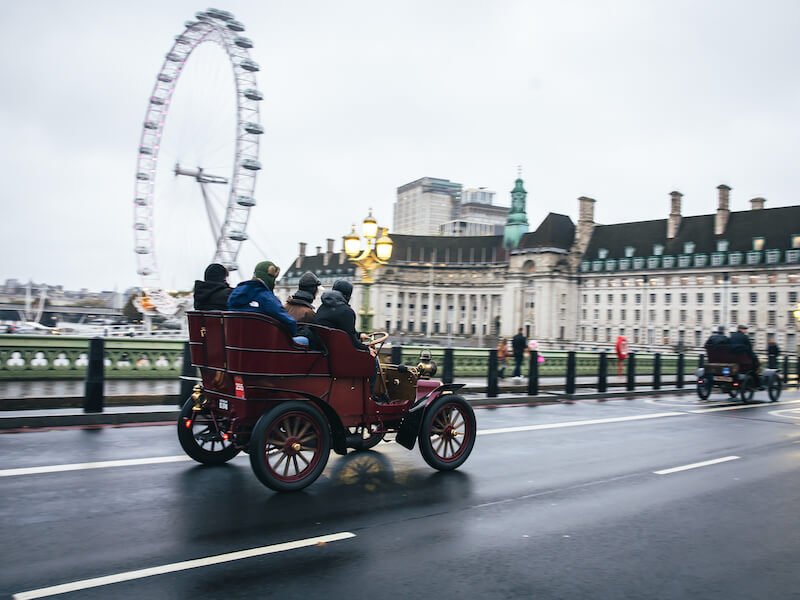 Having left a damp Hyde Park, the antique cavalcade splashed its way past many of London’s most famous landmarks including Buckingham Palace, Admiralty Arch, Trafalgar Square and The Cenotaph before entering Parliament Square.

To provide less congested routes through south London, the route then split into two with half the field crossing Westminster Bridge under the iconic ‘Big Ben’ and the other half crossing Lambeth Bridge.

As the rain intensified, the two routes converged north of Croydon with the entire drenched field then heading towards a very welcome halfway stop – and shelter – at The Hawth Theatre in Crawley. 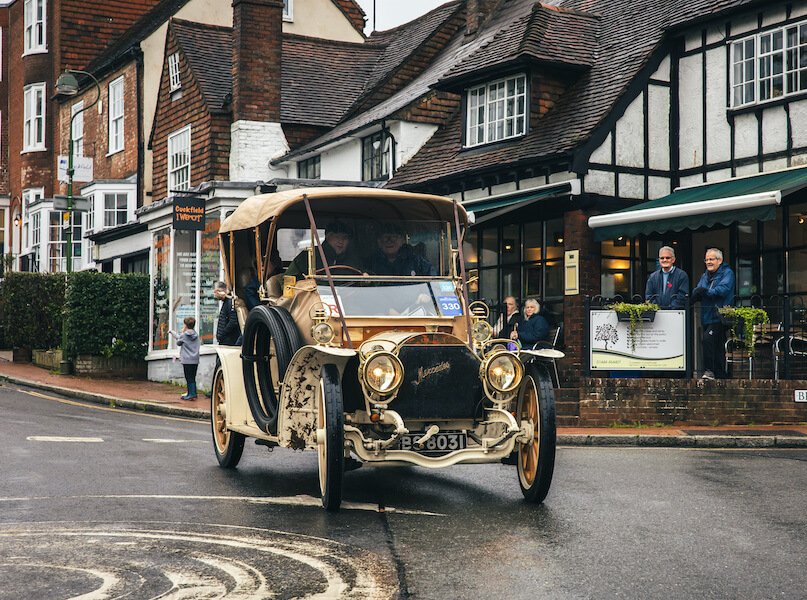 Providing an element of precision to what is a non-competitive journey, the section just north of the CARS Pit Stop at The Hawth included a Regularity Time Trial. Supported by the event’s official timing partner, A. Lange & Söhne, this required drivers to get as close to a pre-chosen average speed as possible. This year’s winner was a 1902 De Dion Bouton driven by William Nall.

Once refreshed in Crawley, cars and crews headed back into the driving rain, passing through the rural villages of Sussex and then over the South Downs and through the streets of a flooded Brighton to a very welcome finish on a wet and windy seaside Madeira Drive. 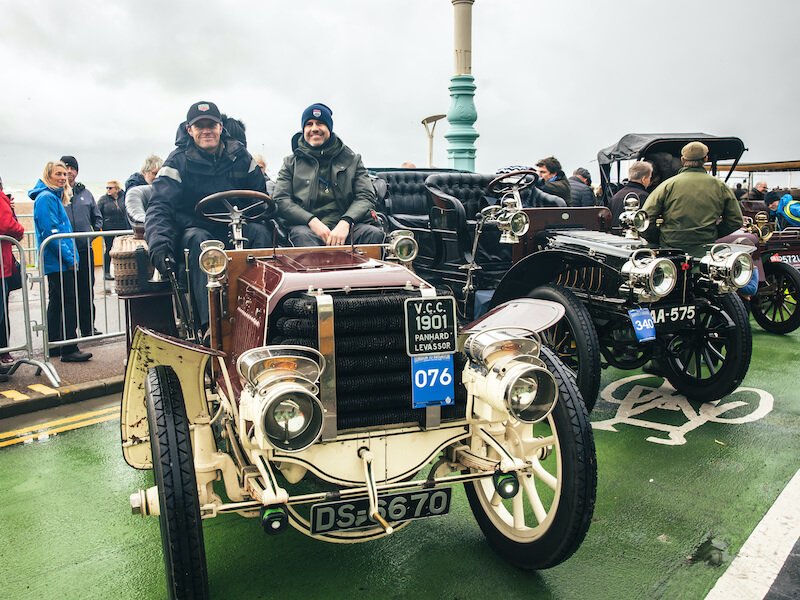 “I have certainly had easier and more comfortable Veteran Car Runs but few if any have been more rewarding than this year’s epic London to Brighton,” said Ben Cussons, Chairman of the Royal Automobile Club. “The inclement weather certainly gave everyone a taste of what early motorists back in the Victorian era had to endure in the days before cars offered any real protection from the elements.

“I congratulate all those who accepted this year’s challenge, and congratulate even more everyone who endured all that Mother Nature could muster. They came smiling through. I would also like to thank all the wonderful volunteers who lined the route, cheering us on all the way and, of course, our ever enthusiastic partners without whom this very special annual homage – the world’s longest running motoring event – quite simply would not be possible.”