Auto NewsPrince of Wales’s Aston Martin DB6 Volante to feature at Concours of...

Celebrating the most glamorous British marque of all: Aston Martin.

The Concours of Elegance, presented by A. Lange & Söhne, has announced that its upcoming 10th Anniversary show will celebrate the most revered British marque of all: Aston Martin.

The show, which will take place from the 2nd to 4th September in the setting of Hampton Court Palace in west London, will assemble the very finest examples from the company’s storied history. Appropriately, the machinery lining up 70 breath-taking concours cars in the immaculately manicured palace grounds will include The Prince of Wales’s beloved Aston Martin DB6 Volante. 2022 will mark the cherished classic’s return to the Concours of Elegance, 10 years on from its appearance at 2012’s inaugural event.

The Prince of Wales’s open top Aston is perhaps one of the most famous British vehicles of all, an icon that has appeared at numerous significant events over the past half century. The effortlessly cool DB6 Volante was unveiled at the 1966 London Motor Show, right in the middle of the swinging 60s, one year after its Coupe sibling. Finished in the striking hue of Seychelles Blue, the car has been treasured and enthusiastically used ever since. This September’s event – which proudly supports the Princes’ Trust – will see this wonderful DB6, which remains in superb original condition, take its place within the palace grounds. 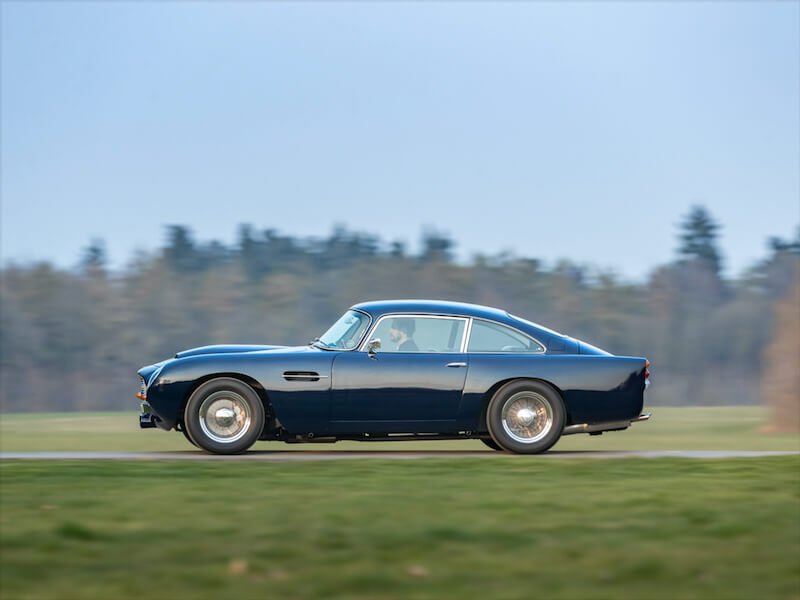 The display will also welcome an Aston Martin DB5 with a difference: one with a thunderous V8 motor under that familiar long bonnet. A truly fascinating one-off example, ‘NPP 7D’ was the first factory prototype used to develop the V8 engine earmarked to replace the long serving, Tadek Marek designed straight-six, an engine in use since the introduction of the DB4 in 1959. The test mule was constructed by Aston’s engineers at Newport Pagnell in 1966 using a DB6 chassis, cloaked in a modified version of the DB5 body. As one might imagine, the platform – designed to house a 4.0-litre six – required major surgery to accommodate the substantial 5.3-litre V8, with the engine bay and transmission tunnel both extensively re-worked. The resulting car, finished in Pacific Blue paint, was put through an exhaustive testing process, in which it was sampled by the great and good of the Aston Martin world – including famed engine designer Tadek Marek. Every drive was recorded meticulously in the car’s log book.

In the January of 1969 after three years of continuous assessment and tweaking, the project was concluded – the V8 development deemed a success by the senior figures at Aston Martin. That V8 would soon end up in the DBS V8 in 1969, spawning a new breed of Newport Pagnell’s V8 powered ‘brute in a suit’ models; forming the backbone of the Aston Martin range right up to the turn of the millennium. Unusually, after its retirement, the test mule not scrapped – a fate that often befalls development vehicles – instead it passed into private ownership, where it has remained to this day. Recently prepared by marque specialists Nicholas Mee & Company, this genuine piece of Aston Martin history presents in superb condition. 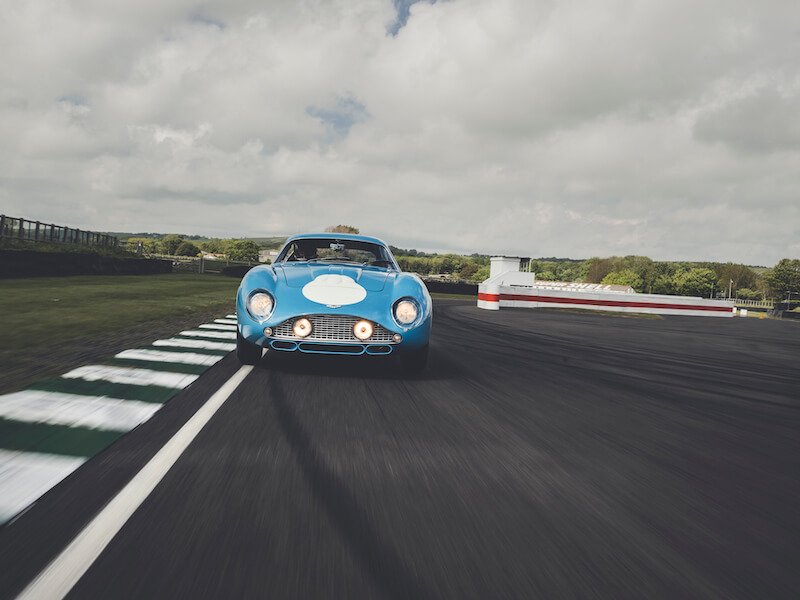 The glamorous event will welcome another truly exceptional Aston Martin to Hampton Court Palace – to many the most beautiful of all: the hallowed DB4GT Zagato, in its most special form, no less. Combining the proven, high-performance DB4GT mechanicals with a stunningly stylish – and light – aluminium body by Italian coachbuilding house Zagato – the DB4GT Zagato represented the best of all worlds; the ultimate 1960s road and racing Aston Martin. The car that will be on show in under two months’ time is chassis number 1093/R, the third of the MP209 ‘ultra-lightweight’ motorsport orientated examples, finished in the arresting hue of French Racing Blue. Built in 1962, the lightened special was delivered new to committed Aston Martin enthusiast and racer Jean Kerguen. 1093/R competed at Le Mans in ‘62, returning a year later with a series of mechanical upgrades and aero additions including a small rear spoiler, designed to improve stability in the high-speed sections of the course. With its svelte Zagato shape, the 4.0-litre straight-six was hitting over 170mph on the Mulsanne straight; an MP209 Zagato bodied DB4GT was a seriously fast car. Recently restored by Aston Martin specialists RS Williams, 1093/R presents in peerless condition.

A conventionally bodied DB4 will also join the 70 strong concours field, a lovely series 2 car with a colourful history. The charming example is one of the 349 Series 2 cars. Introduced in 1960, a year on from the DB4’s launch, the Series 2 cars packed a raft of modifications that aimed to rectify the ‘teething issues’ encountered by Series 1 owners. Among these changes was a front-hinging bonnet, the thinking being that if the latch failed at speed – presumably something of a concern – the hood would not fly up and obscure the driver’s view of the road ahead. Cooling of the 3.7-litre, 240 bhp in-line six was also improved with a larger sump and uprated oil pump.

The DB4 that will be shown in just a few weeks’ time was originally owned by a rather eccentric, British gentleman racer and enthusiast by the name of Syd Greene. Greene competed regularly in races with the car across the UK and Europe. One suspects that Greene would rather have stood out in the paddocks of 1960s circuits on account of the fact that he drove with one arm – his left lost to an accident when he was 16. While such an injury might have dampened the enthusiasm and appetite for racing of some, it did little to dissuade Greene. He devised an idiosyncratic, but apparently effective racing technique, changing gear with his right arm – reaching across his body, this being a right-hand drive car – whilst gripping the DB4’s wooden rimmed wheel with his thighs. The car survived Greene’s ownership and was given a full restoration in 1990; works included upgrading the engine to full Vantage specification. It is a stunning example, finished in the original Aston Martin colour of ‘Snow Shadow Grey’ with a rich burgundy leather interior.

The display will also feature a much earlier 1930 Aston Martin International, a model from a seismic point in the marque’s history; marking the emergence from a turbulent period of financial strife – when they had actually ceased production of car – before being rescued by engineers Augustus Bertelli and Bill Renwick. The duo saw great potential in the struggling company, and sensed an opportunity. They had recently developed a new four-cylinder engine and felt that Aston Martin could provide an excellent platform in which to showcase it. Having taken control of the company, they incorporated their dry-sumped 1½-litre powerplant into the International, with the resulting car shown to the world at the London Motor Show in 1929. The sporting, open wheeled car had a ground hugging stance, enabled by the ‘underslung’ chassis. It quickly became renowned for its speed, excellent brakes and impressive roadholding ability – just as well, as it was a very expensive car for its day; priced at £598 it was equivalent in cost to a large family home at the time. The car that will be on show at Hampton Court is particularly notable as one of the few cars that was bodied outside Aston Martin’s Feltham factory, instead being clothed in a Drophead Coupe body by James Young.

These superb Aston Martins and more will be on show as part of the display of over 70 rare and spectacular Concours Cars at this September’s glamourous event. Further star cars are set to be announced in the coming weeks. Outside the main display of vehicles, the Concours of Elegance will assemble around 1,000 further cars in a series of special features and displays, as well as a live collector car auction by Gooding & Co.

James Brooks-Ward, Concours of Elegance CEO, said: “We are delighted to announce that such a spectacular range of Aston Martins will star at our show – now just a month away. The display will gather the rarest, most significant cars to have worn the famed winged badge, charting the history of this most charming British marque. The carefully curated line-up – drawn from the world’s leading private collections – will celebrate all that makes Aston Martin great; engineering ingenuity, remarkable resilience and of course, captivating design flair. The feature is a fitting addition to our 10th anniversary event, and one we cannot wait to share with our guests.”

Away from the automotive displays, Concours of Elegance will once again be an occasion of pure luxury, with champagne provided by Charles Heidsieck, picnics by Fortnum & Mason, and a collection of art, jewellery and fashion displays. Presenting Partner A. Lange & Söhne will once again showcase some of its most intricate timepieces.