A very yellow VW Golf ready to be transformed 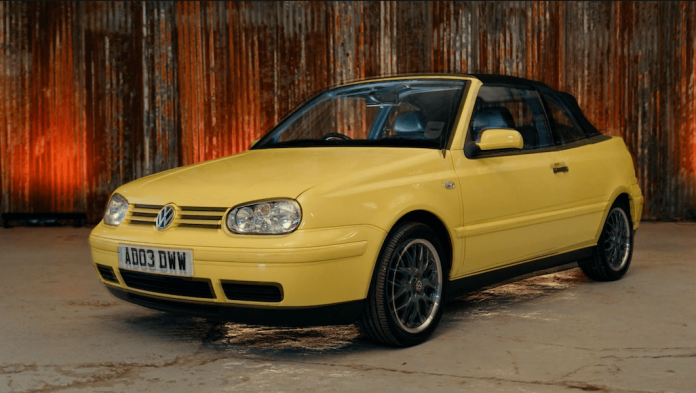 There was plenty of work for the Wheeler Dealers to do on this brightly-coloured Golf. Elvis loved it but Mike wasn’t quite so sure…

It was mechanic Marc ‘Elvis’ Priestley that found the latest Wheeler Dealers project, and it was a VW that reminded him of his very first car. But despite his enthusiasm why was Mike Brewer going to take a bit of convincing? Just take a look at the colour…

Mike makes no secret of his aversion to yellow cars, but he was finally persuaded to go and take a look and what he found did nothing to change his mind. Russell wanted £1500 for this Golf Colour Concept, but it needed plenty of work – there was the scruffy paintwork, faded (and very yellow interior), corroded alloy wheels, tired suspension, and a non-working convertible roof. Still, at least a new windscreen was included in the £1350 he agreed to pay.

After Elvis removed the interior, wheels and rear bumper his first job was to tackle a spot of rust on the rear wheel-arch. It was too much for a quick fix, so the corroded section was cut out and fresh metal welded in for a good, solid repair. With that done, it was on to some mechanical work.

The noisy suspension was next for investigation, the master mechanic discovering a broken front coil spring. But rather than just fit a new one he spent £200 on some rather nicer adjustable coil-over units – the ride and handling would be much-improved and they also allowed for some tweaking of the ride height.

In the meantime, Mike headed off to see leather expert, Tim, where those tatty seats were to receive some quality restoration work. Cleaning was first – always one of Mike’s favourite jobs – followed by a session with industrial-strength solvent to strip the surface from the leather. With pigments mixed for the perfect colour match the seats were soon looking as good as new.

Back at the workshop Elvis set to work on refurbishing the stylish split-rim alloy wheels, starting by separating the centres from the rims. After a brief struggle with one particularly awkward bolt it was off to a specialist where the wheels were transformed with some diamond-cutting and painting. They would perfectly complement the polished paintwork, but there was another fix needed before the eye-catching drop-top would be ready for sale.

The non-working roof needed sorting, Elvis discovering that an issue with the ignition lock was responsible for the problem. But rather than replace that he came up with his own clever fix which involved a bit of re-wiring. Making a connection to the brake light’s electrical circuit meant the driver would need his foot on the brake to open the roof – so there was still a safety system – but it now worked. A proper result!

So how much had all this cost? Well, the grand total stood at £2676 – the biggest expense was the £600 spent on the interior – but there was still going to be a tidy profit. The bigger question, though, was whether Mike would finally be convinced about this very yellow modern classic. And the answer? Perhaps the jury is still out on that one…

Still, a trip to the seaside and a meeting back at the workshop with some proud owners of yellow cars did put a smile on his face, and the lovely couple from Scotland who paid £3100 for the car might have helped, too!

Mike Brewer says: “The times I go and see a car that has been presented in a disgusting way! I can never get my head round my people just don’t clean their cars before they sell them!

“When Elvis found this yellow golf I had no interest, the colour bothered me and the car was uninspiring. However, Elvis pointed out there could be a profit in this one so I took a gamble.

“I feel like I should have had a tetanus injection after viewing the car it was that bad, but now it was ours and the problem would become Elvis’. The result was remarkable and even I managed to find a little admiration for this yellow peril.

“The real surprise was the yellow car show Elvis arranged at our garage. I was thrown in at the deep end and face to face with all these yellow car owners after I’ve said for years I can’t stand yellow cars! However, everybody had a great time and I really did appreciate their cars.

“To see the Golf being sold to a couple in Scotland couldn’t have put a bigger smile on my face as this bright little car will live on under grey skies for a long time thanks to Elvis’ hard work.” 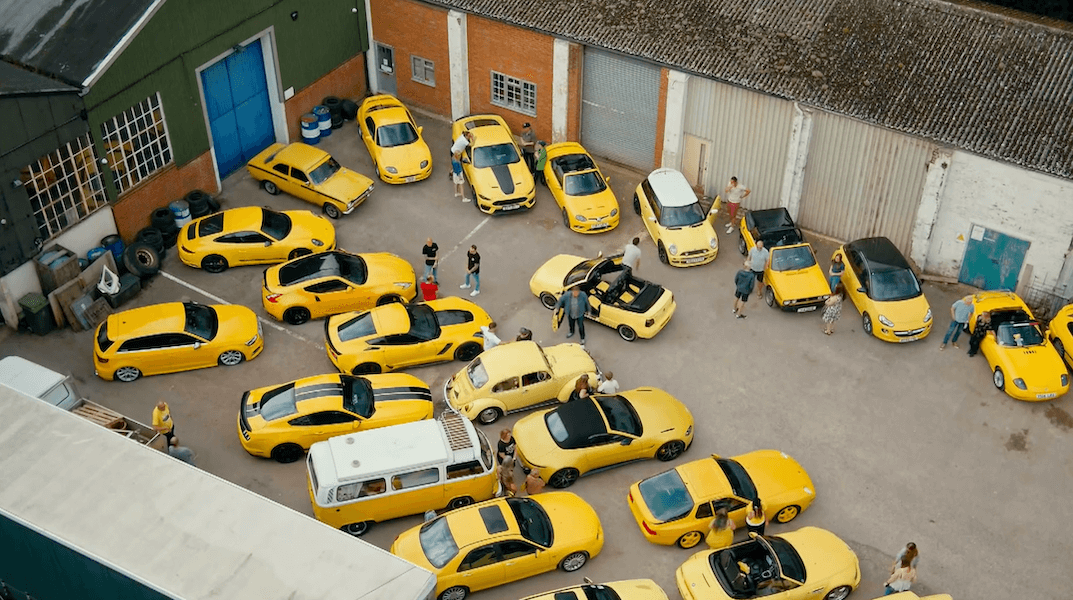 Marc ‘Elvis’ Priestley says: “I loved this one, it was a lot of fun. The transformation from Mike bringing the Golf back to how it turned out in the end was staggering and shows that a cheap car can still look great and turn a profit. Even I was amazed at how well that interior turned out and together with the wheels and new stance, the car looked even better than when it rolled out of the VW factory.

“Mike’s face when I surprised him at the end with the yellow car gathering was brilliant and I feel like I might have finally won him over just a little bit.
“It’s been an absolute joy and privilege to join the Wheeler Dealers family and to work with Mike and the truly amazing team behind the scenes. We’ve loved making this series and Mike and I have been overwhelmed by the positive feedback from everyone along the way, so thank you and we’ll see you again very soon.”

As families gather safely round the fire for Christmas, our own Mike Brewer offers his alternative Christmas message for 2021. Before her Majesty The Queen...

Winter Classic Car events not to be missed

If you’re looking forward to classic car events over the next few months then we’ve got some cracking ideas. Don’t miss ‘em…We know many...
- Advertisement -