Mike Brewer shares his behind-the-scenes story of the Travelall

In the third episode of the new series of Wheeler Dealers, Mike found one of the original SUVs – a 1968 International Harvester Travelall. A monster of a vehicle, complete with authentic shag-pile headlining, it was a big job for the team. Mike shares his behind-the-scenes story…

Today’s roads are clogged with a particular genre of car that is the new norm, the SUV. Every manufacturer on the planet has a SUV, with its lofty driving position, plenty of space, practical and, because most are built on car platforms, they handle well and can be economical to own. What’s not to like? They are here and will be forever. 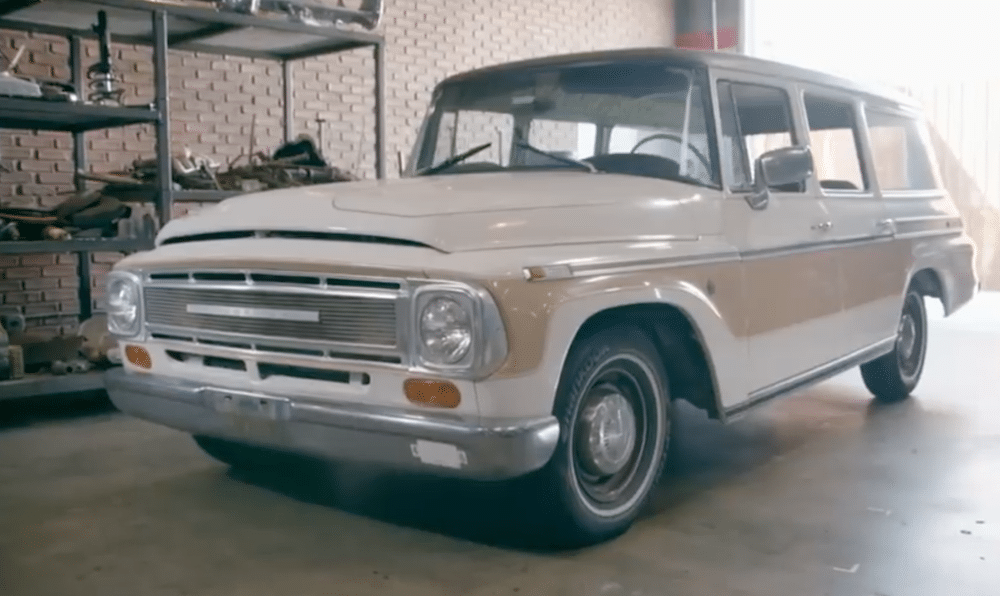 But, have you ever thought how they got here? Well it’s not a recent invention but one that’s been around for decades. We have to go back to the USA and the early 1950’s when Chevrolet, who already had the market corned with their Suburban, had to take on rival International with its new Travelall. Here we get the birth of what becomes the modern SUV.

Back then, International took a truck chassis and effectively put an estate car on top. It worked and soon American families were lapping them up and taking in the big country.

Big windows, tons of space and simple mechanics meant that the race between Chevy and International had started. What I find strange is that it took decades for the world to catch up, on what is now the biggest segment of the global car market. 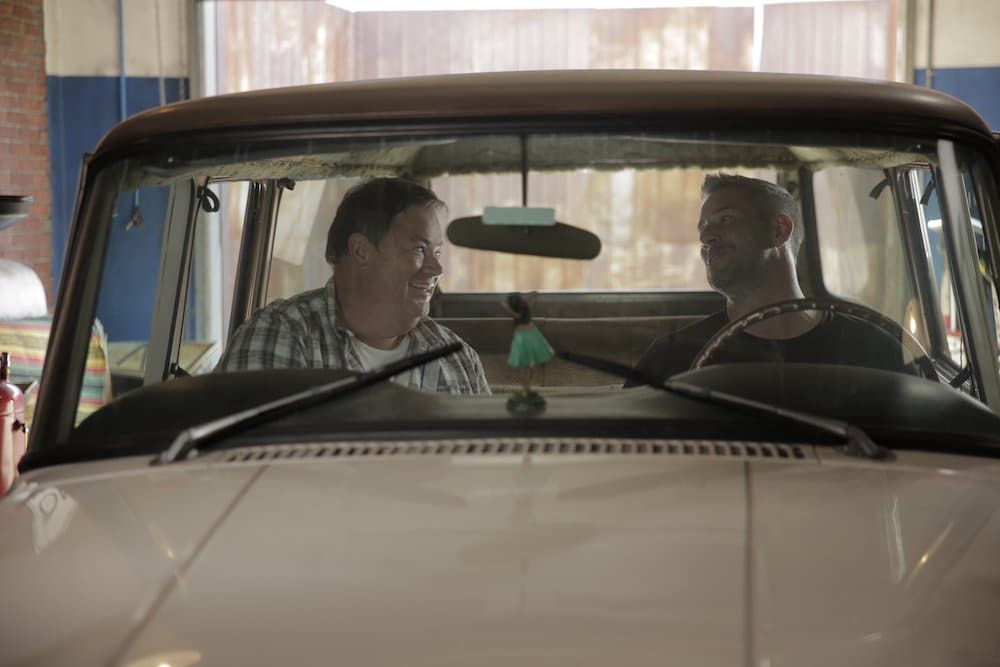 I’ve been looking for one for ages so I can tell the story of the SUV. It’s a car that always eluded me. I tried years ago in the UK and thought it would be easier in the US, but it took six years and nearly the last car we bought in the US.

I found the 1968 International Harvester Travelall almost on my doorstep, belonging to  guy called Chris. He popped it down to show me and it didn’t disappoint. Other than it’s almost rust free appearance and its cracking sounding V8, the only thing that got me worried was its sheer size and the shabby headliner, straight out the 80’s playbook finished in shag-pile carpet! I had to have it, just £10,000 for a car the size of a Peckham apartment that you could park on a beach. It was mine. 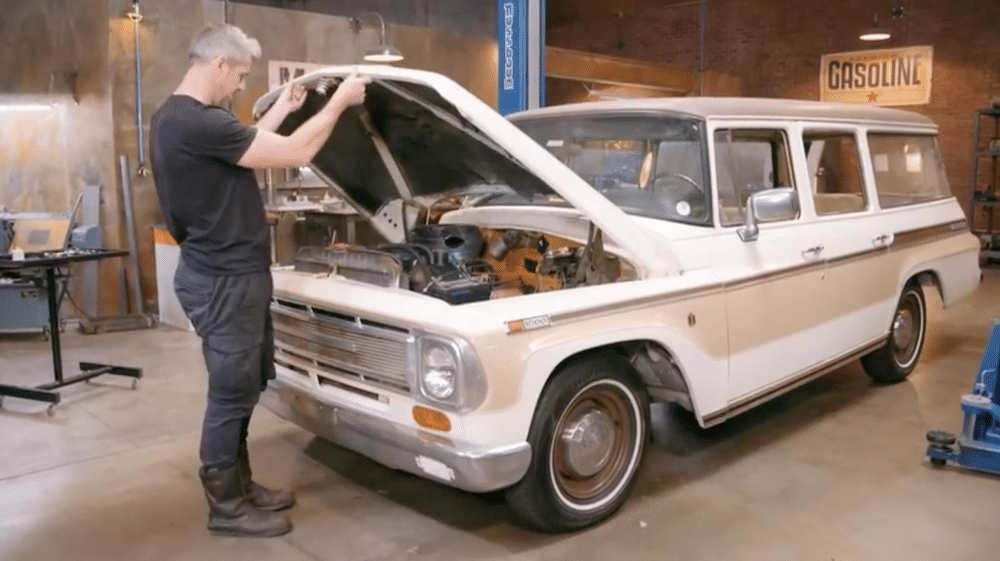 After Ant squeezed this giant onto our ramp, he set about making sure we got some reliability so he changed the ignition system from points to electronic. This is a simple and effective upgrade that can not only make it more reliable but add power, not that this needs much. Its typically American with a 304 V8 engine, that’s about five litres in our money!

Whilst under the bonnet, he changed the leaky valve covers and ditched the modern rubber ones for the older style cork ones, so it was now leak free as well. I then set about getting a tin of paint to colour match a small rust repair that Ant could do in his sleep.

As a side note, Ant refused to rattle can the repair and thought we should send it to a shop. So I crept in when he wasn’t around and I did it! He couldn’t believe that a shop hadn’t done it. But I wanted to show that with good prep and quality paint you can get matched by an expert, you can achieve that paint shop finish at home. 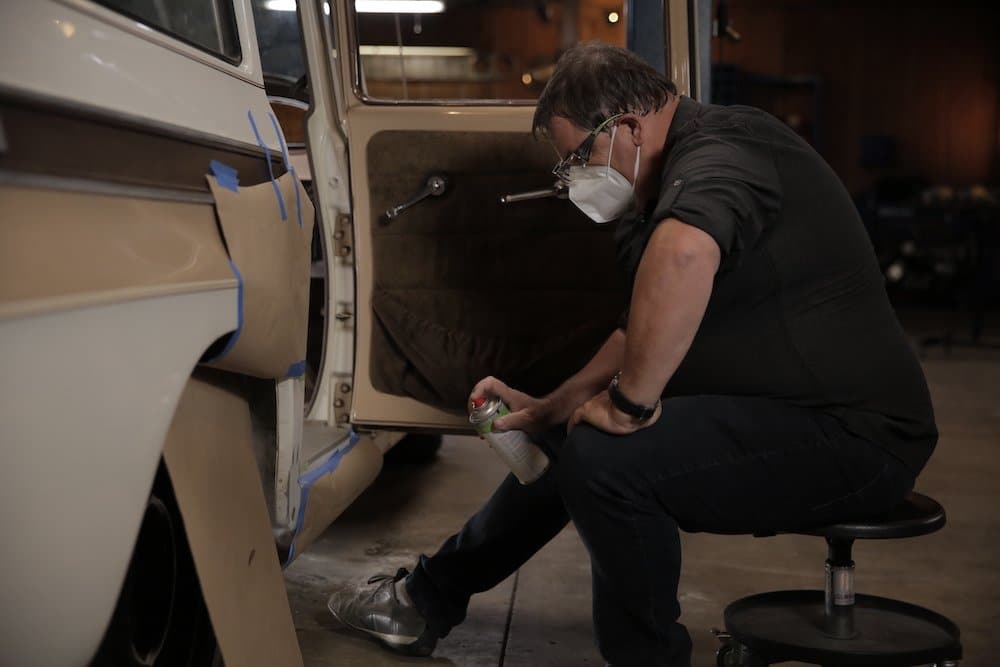 Next up that tatty interior; Ant removed the seats and carpet and resigned them to the bin. He then cleaned up the space and installed new sound deadening material to give more cockpit comfort. New carpet installed, new seat covers, and it looked great.

Now the biggie was that headliner. It seem to go on forever and once it was stripped out Ant had to re-paint the sides before fitting the headliner up. We never quite finished the job before we did the test drive and had to spend a few hours after the fun stopped to get the Travelall finished. You may notice we never show the full ceiling at the end. We can’t win them all. 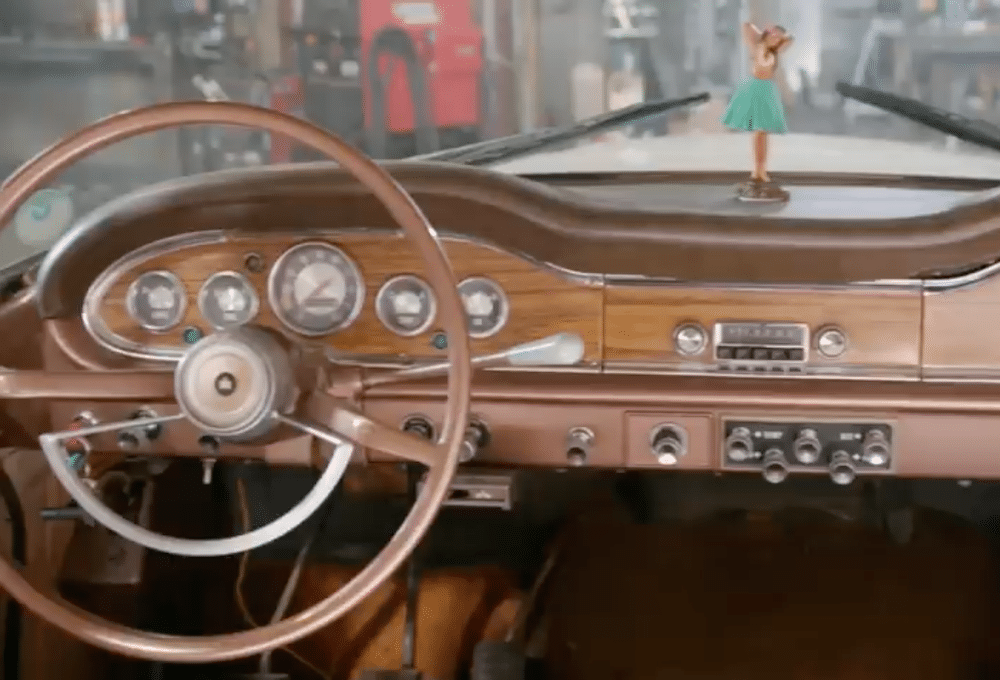 The good news is that I sold the Travelall easy, within just an hour of it being on the internet. I got around £15,000 for it which showed a decent profit and made the new owner very happy.

We set about to tell the story of the birth of the SUV and we did. We had fun along the way doing simple jobs and making this International proud again to take in the big country. We’d always love to show more but in 42 minutes, we think we knocked this giant out the park. Thanks for watching.