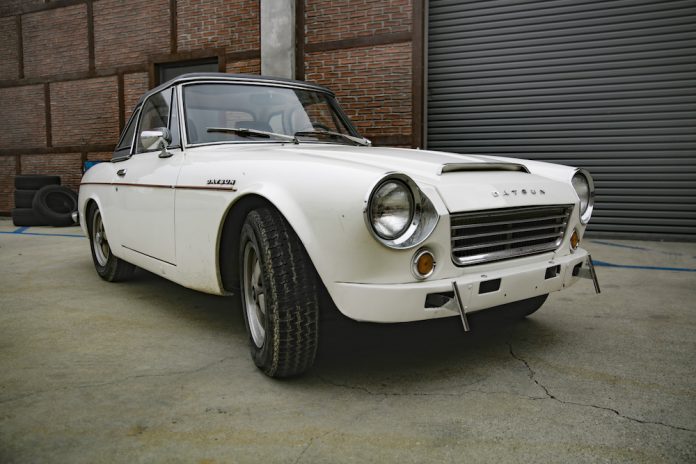 Wheeler Dealers is back, and what a cracking way to kick off the new season. This time Mike Brewer had got his hands on something a little unusual in the form of a 1969 Datsun Roadster.

Also known as the ‘Fairlady’ – the ultimate ‘Wheeler Dealer’ Mike had little success in explaining the origins of the name to mechanic Ant Anstead – the sought-after 2.0-litre model was one he’d been after for a few years, and this particularly example was, naturally, something of a bargain.

A trip out to the Mojave Desert to see friend, Gene Winfield, revealed a car that was in sound, rust-free condition and with an asking price of just $9000, Mike was always going to find it hard to resist. Yes, it was going to need some work to bring it back to its best – it wouldn’t be Wheeler Dealers without some jobs to do, after all – but despite feeling somewhat tired on the test drive it was clearly the perfect project. And having agreed on $8500, it was back to the workshop for Ant to work a bit of magic.

That work would start with a thorough overhaul of the steering, brakes and suspension. The first of these involved addressing the worn steering idler, Ant stripping down the mechanism and treating it to a thorough clean and rebuild. That was a straightforward job that restored the steering’s sharp feel, while replacing the various worn suspension bushes got the little sports car handling properly, too.

On with the brakes then, and they were treated to something of an upgrade with Mike sourcing new ventilated discs, pads and calipers. Volvo parts were perfect for the job. Getting the Datsun steering, handling and stopping properly had set the boy’s back almost $3000. With those oily bits sorted it was over to Mike to fix a problem spotted when he bought the car. Fitted with an unusual plastic hardtop, the Roadster was missing its soft-top roof but thanks to a friend it didn’t take long to track down a replacement. Lee had just what was needed, although the frame and soft-top needed a bit of restoration. This was a chance for Mike to get his hands dirty, helping to prepare and paint the frame, clean the roof, and get the whole lot re-assembled ready for fitting to the car.

There was still work to do on the oily bits, though, so it was time for Ant to get under the bonnet and sort the noisy exhaust header. It made the engine sound ‘like a lawnmower’ and the fix would require plenty of work. The twin carburettors and inlet manifold were removed and the coolant drained, and with the header finally off Ant could weld up the cracks. A new section of exhaust pipe and some ceramic coating finished it all off nicely.

Was that it? Well, not quite as Ant still had a few last jobs to attend to. The cramped footwell made pressing the pedals a bit tricky, but some re-shaping of the brake pedal soon had that sorted. New seat covers smartened-up the cabin. The Datsun was finished and with the purchase price included the final cost was $12,395.  Not only did it look great but it drove superbly, too, so it was no surprise that buyer Josh snapped it up for $14,000. The first car of the new series had bought a tidy profit!

“We really enjoyed doing the Datsun and it was a treat to buy from Gene,” said Mike. “The real revelation was the brake upgrade being compatible with Volvo meaning we could use Volvo parts. The other bit that I really enjoyed was the little trick about painting the frame for the soft top but heating it up first. It gives it a much better finish.

“At the end of the show we both dressed up as fine English countrymen in our cricket whites to celebrate what should be the best of British, but was made in Japan.”