Wheeler Dealers Mike Brewer and his mechanic Ant Anstead take on the Saab Viggen in Episode 3. 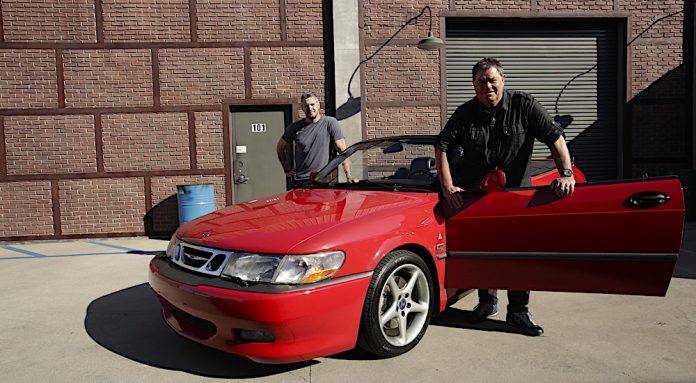 The previous episode featured a fast Audi, and with Wheeler Dealers Mike Brewer keen to continue with the theme of high-performance European cars so he headed to Sweden – well actually, it was California where he found this cracking Saab Viggen convertible.

With an asking price of just $4500 the 2001 Saab 9.3 Viggen was a bit of a bargain, despite the rather obvious damage to the bodywork, and Mike had no hesitation in snapping it up. However, what viewers wouldn’t have seen was the forest fire in the area. While buying the Saab, there were National Guard helicopters dousing the flames with pink foam, which of course ended up on Mike, the Wheeler Dealers crew and the car! There was plenty of cleaning to be done… 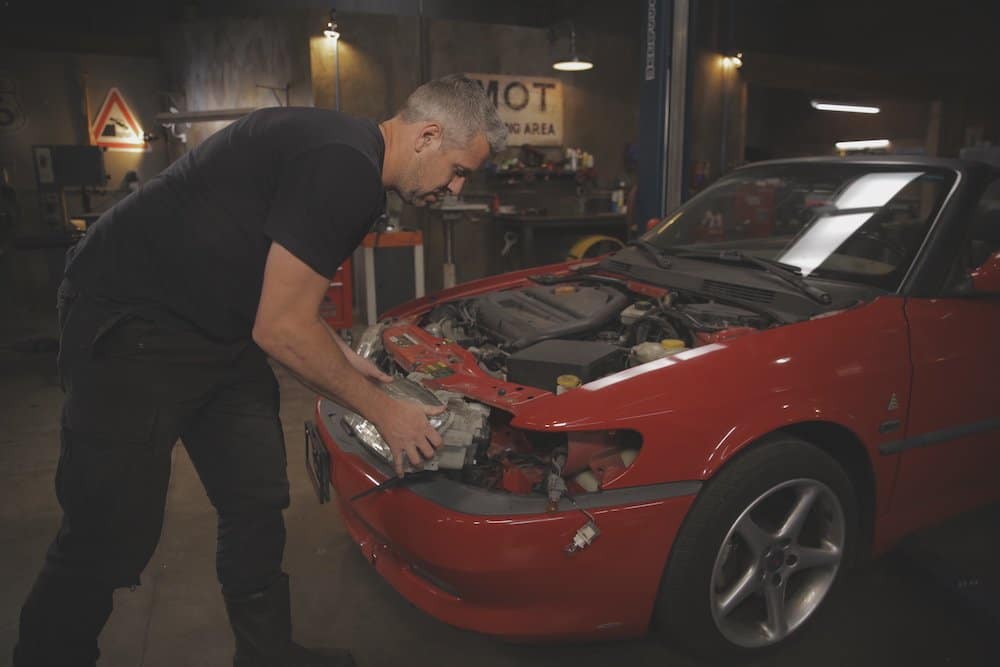 Safely back at the workshop, mechanic Ant Anstead loved the latest project and wasted no time getting stuck in. First job was removing the damaged bumper along with the bonnet, rear spoiler and door mirror caps which had all been affected by the fierce California sun. Repairing those were jobs for Mike, along with the worn seats that were also removed.

Unfortunately, Ant had also spotted a coolant leak and, after a pressure test of the system, feared that it might be yet another head gasket for him to replace. But closer examination revealed an issue common to these Saab engines – a loose cylinder head bolt. Removing all of the originals and replacing them with improved ‘Torque-to-Yield’ bolts, tightening them to the correct torque, soon had that leak cured.

But having avoided a time-consuming and expensive chunk of engine work, Ant discovered something else that needed attention – the roof mechanism. Leaking hydraulic rams were the problem, and it could have been a costly one had Mike not taken them to a specialist in Oregon. There, the rams were refurbished and improved, and all for just $510. 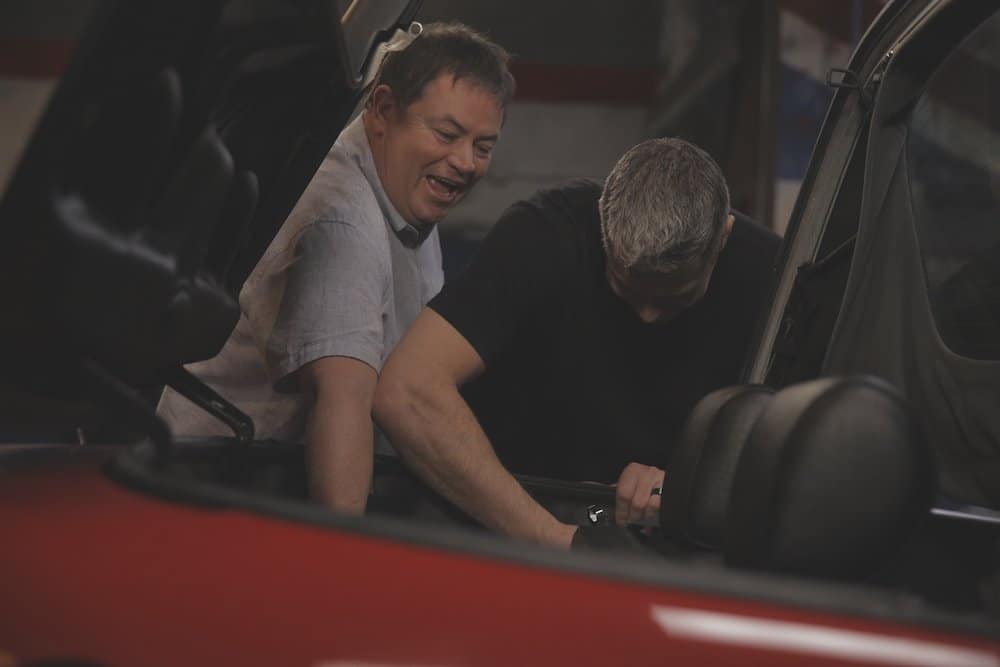 Not that the work was finished quite yet. The clunk from the suspension that Mike had noticed on the test drive? That turned out to be a worn top mount on one of the front struts, and with the brakes and suspension stripped down it proved a cheap and simple fix. And while he was there Ant also took the time to replace a worn track rod end and replace a driveshaft to cure a damaged CV boot. Incidentally, that suspension repair also helped to reduce the scuttle shake that afflicts these cars so the driving experience was improved, too.

All that was left was to fit the new front bumper and refit the bonnet and other parts that had received a fresh coat of paint. And refit the refurbished seats. All of that cosmetic work had cost the boys a little over $1500, but with the rapid Saab Viggen now fighting fit, it was job done and time for a test drive. 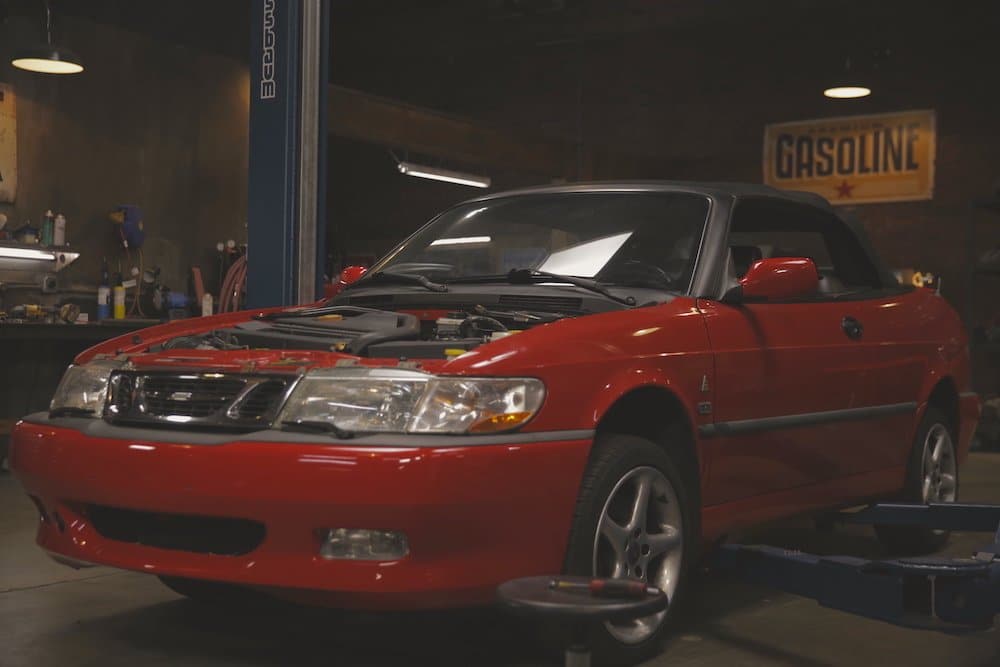 Mike had chosen the quirky, Danish-themed city of Solvang in Southern California’s Santa Ynez valley which suited this stylish drop-top rather nicely. The pastries looked lovely, too!

He said: “The restoration was very straight forward, and one of the easiest of this season, aided by the massive Saab fascination in Los Angeles making parts and skills more readily available. Potential buyers were plentiful the minute the car was put up for sale, thanks to a big Saab community in the US.” 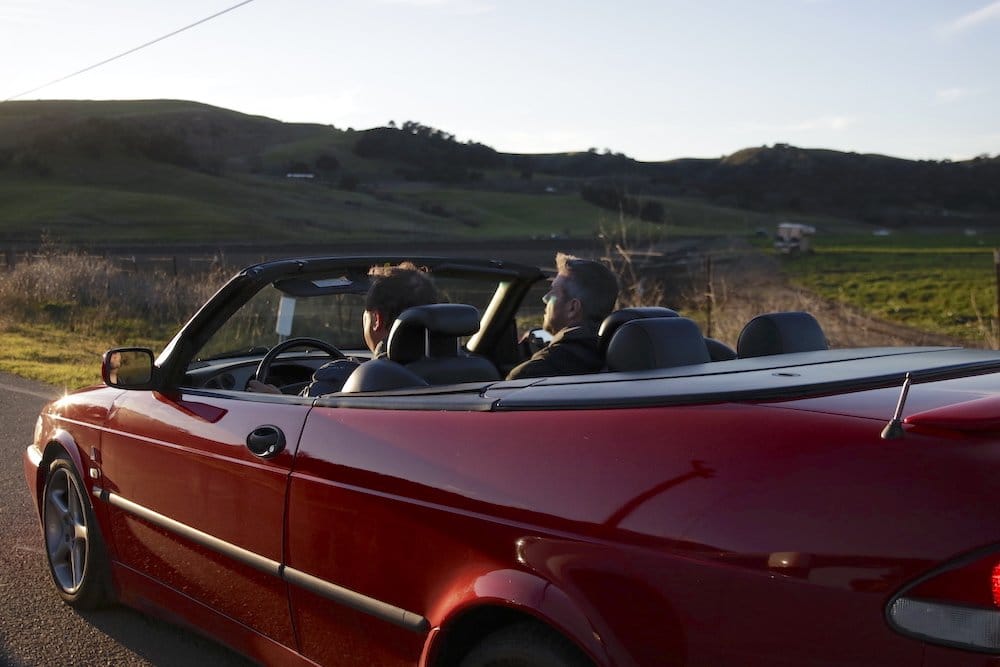 It was lucky buyer, Paul, that snapped it up for just $7500. We think he’s going to enjoy the swift Swede…