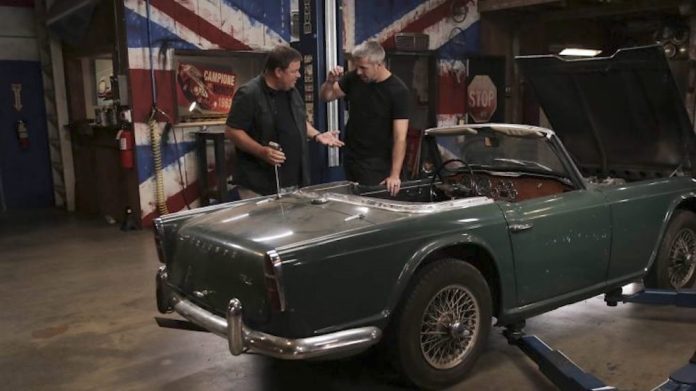 The new episode of Wheeler Dealers saw Mike Brewer discover a real British legend hibernating in a US garage – a Triumph TR4 – and what a triumph it was!

Just when you think we are running out of Classics to find as its thought that most have been discovered, you can get a surprise that will leave you gasping!

It’s believed that 85% of classic cars are still in sheds and garages waiting to be discovered or finished. It’s been my job over the past quarter of a century to find these cars and bring them to the screen. Every year it gets harder but, I’ve learned a few lessons along the way, the most important being to keep as many contacts as possible and keep the information flowing.

Donn Dabney first appeared on my radar and on our screens when he found me a 1957 T-Bird that I managed to buy and ship to the UK where me and Edd made it the car it should have always have been. 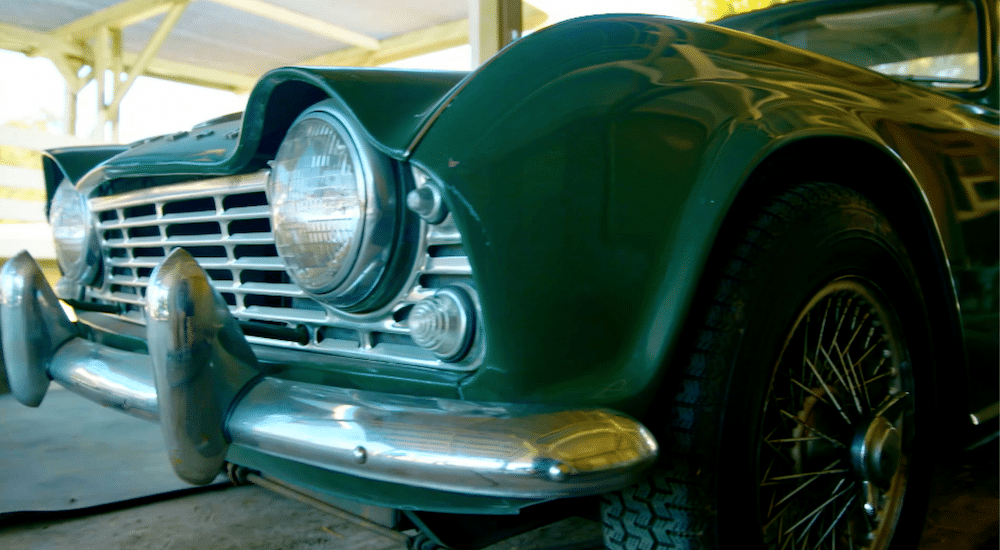 Several years later, Donn finds me a Rover 2000 TC but I reject that and buy a Lancia Fulvia from his stock that Ant and myself charmed into life and made a decent profit.

So Donn has been a great friend and we constantly talk cars. I’ll be honest whenever he calls, I get excited inside as I know he will only have good news. But, even he was struggling to say the words on a call as he was so excited about his latest find that he was talking gibberish…

It sounded like he found a one owner from new, British Racing Green, Wire Wheels, 1964 Triumph TR4 for £5000! After I told him to take a breath, say it again but slowly, I realised that Donn had struck Wheeler Dealers gold.

Now this car has an incredible back story. We don’t mention it in the show for obvious reason but it’s ok for me to tell you now. It was bought new by a guy who became a cop, he married and sometime in the 1980’s got killed in the line of duty. His widow couldn’t let the car go as the memories where locked inside so she built a wall around it in her garage and there it sat until, in her later years, she contacted Donn and wanted it to go to a better home. Donn extracted the car that hadn’t been run for decades and called me. 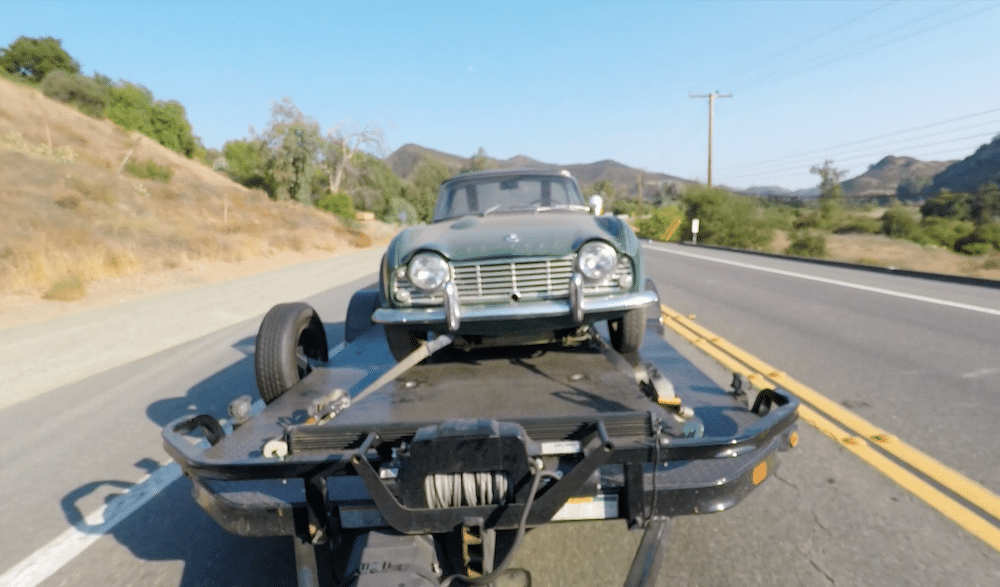 This TR4 was a time piece, all original with bumps and scrapes, worn down by decades of storage and absolutely marvelous! Donn and myself set about tickling the car gently into life, first removing the plugs, a little squirt of penetrating fluid down each bore and leave to sit for a while. Meantime, take the distributor off and clean the points, empty the fuel tank of the old petrol fill with new squirt. I boosted the battery with a jump pack and spun the engine over without plugs, she moved freely!

Next, I put in a new set of plugs, removed the HT lead and spun the engine over again to build oil pressure and prime the carbs, I connected the HT lead, crossed my fingers and with a quick twist of the key, the TR4 woke from it long slumber, burst into life and quickly settled into a nice tick-over. Wow!

What a car! I couldn’t wait to see what else it could do but unfortunately, it’s not wise to drive a car that’s been sat for so long as the tyres where squared, the brake lines were perished. But as long as she moved and ran, this car was mine. Donn did me the best deal I could wish for and I’ll forever be grateful for that. 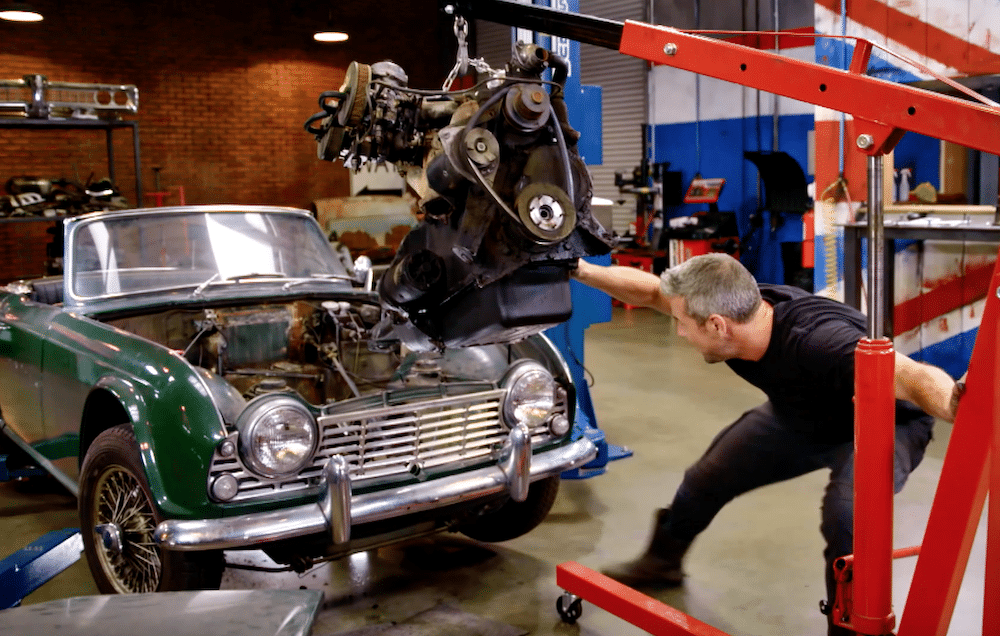 It’s fair to say that Ant has a weakness for the TR4, so when I presented him ours, I don’t think he listened to a word I said, he just stared and smiled. But once the honeymoon was over, it was time for work.

Ant decided to remove the engine and do a complete overhaul and repaint. I managed to get the paint matched to the original so we could repaint the engine bay. We decided to re-skin one of the doors as the metal was too creased, so yours truly made a quick trip back to Blighty where I visited my friends at British Motor Heritage in Oxford.

They could supply me a new door skin, but it was for a TR6. It fits just the same, Ant just had to weld the old lock position and make a new one. We refurbished the wire wheels, suspension, brakes, fuel system, etc. 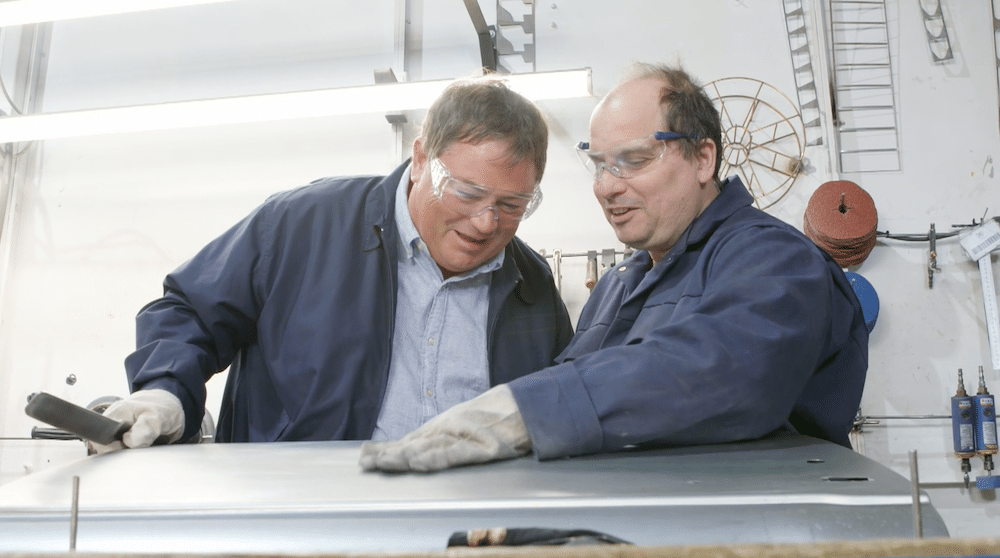 The interior just needed a wipe over and, although we could have gone to town on the old car, we decided to leave as much originality as we could, so left the bumps and scrapes and the odd fray to the carpet edge. For us, it showed the car had a story.

We thought we’d blast the TR4 through some twisty mountainous roads at the end to make sure we were happy with what we’d achieved. This car did more than that. Not only had it given itself up so easily for recommissioning, it was such a treat to work on. 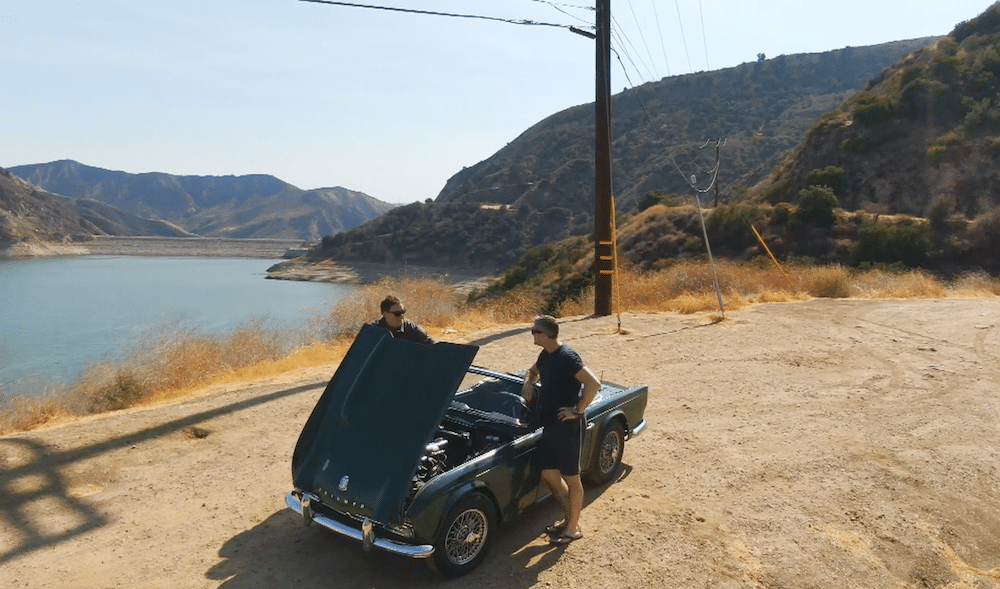 The TR4 was eager to be out on the roads again and came alive, and it showed me and Ant just how far two Brits had come. Here we are thousands of miles away from the motherland yet we can still turn around a British Classic and make a profit. Proper Wheeler Dealers.