Mike managed to buy the worst handling Lotus Europa for sale in the UK! 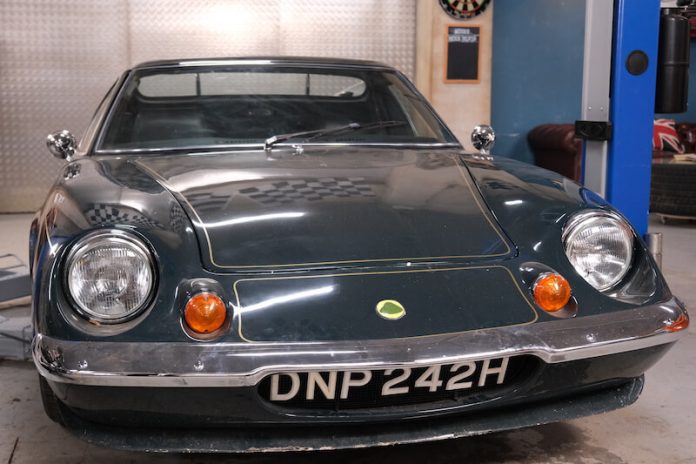 It wasn’t the first Lotus to appear in the workshop, but the Europa was very special. But could Elvis make it handle properly?

For this week’s episode Mike had decided that the show needed a Formula 1 flavour, and that meant a car from one of the most iconic names in the sport – Lotus.  And the classic in question?  The tiny Europa. Ben wanted £18,000 for his 1969 example, but there were going to be some issues to address… 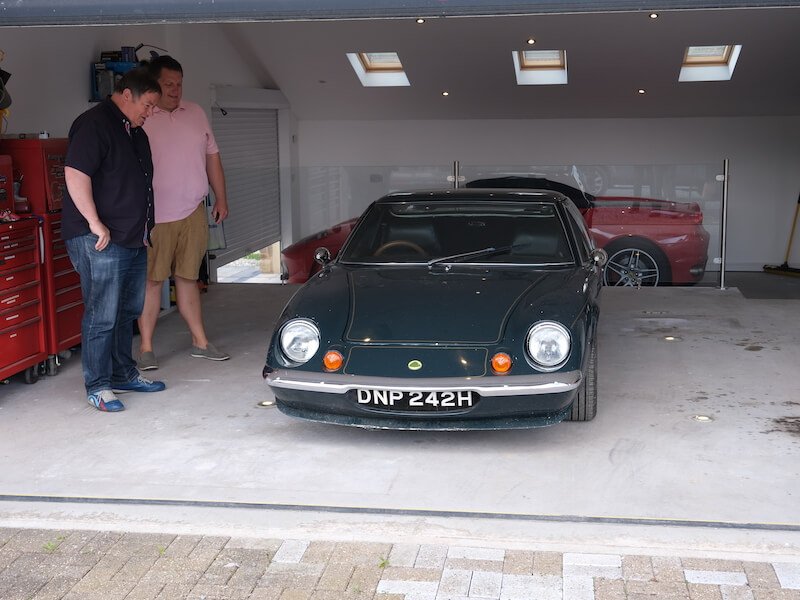 The colour looked gorgeous and the interior was in great condition – although somewhat small as Mike discovered – but it was the mechanicals that caused concern. A problem with the rear suspension meant there was no test drive, but our favourite Wheeler Dealer still parted with £16,500 for this brilliant British sports car.

The F1 connection ensured Elvis was excited by the new arrival, but that suspension issue was a worry. And a drive on private roads did nothing to ease the concerns, the wayward handling coming as a bit of a surprise to the ace mechanic. Back in the workshop it was time for investigation.

Removing the body from the backbone chassis was the best way of seeing what was going on, and it revealed a few things to tackle. Worn gearshift linkages was one, along with various worn suspension bushes and driveshaft universal joint in need of replacement, but by far the worst problem was a loose rear wheel! Discovering a stripped spline on a wheel stud, Elvis had found the cause of the awful handling. 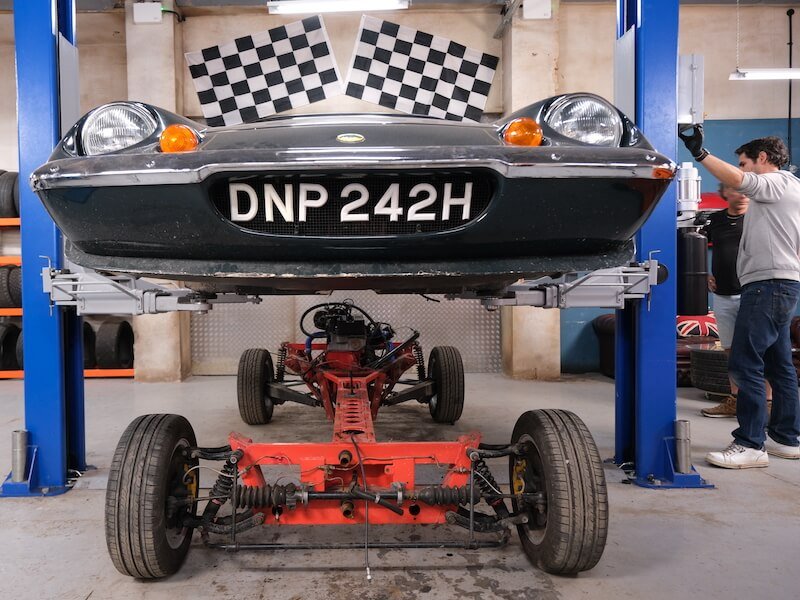 All of those things could be fixed, and spending £582 on parts meant he could get on with making the car drive just the way a Lotus should. Mind you, he could have done with an extra pair of hands when it came to replacing the bearings in the universal joint.

So things were going well in the workshop, but the bodywork was in need of attention, too. That saw Mike head off to see a specialist in glassfibre repairs, taking the damaged engine cover with him. Cracks and damaged paintwork were the main things to sort, but it was also an opportunity to have the correct number of cooling vents put in – there should have been four rather than two. 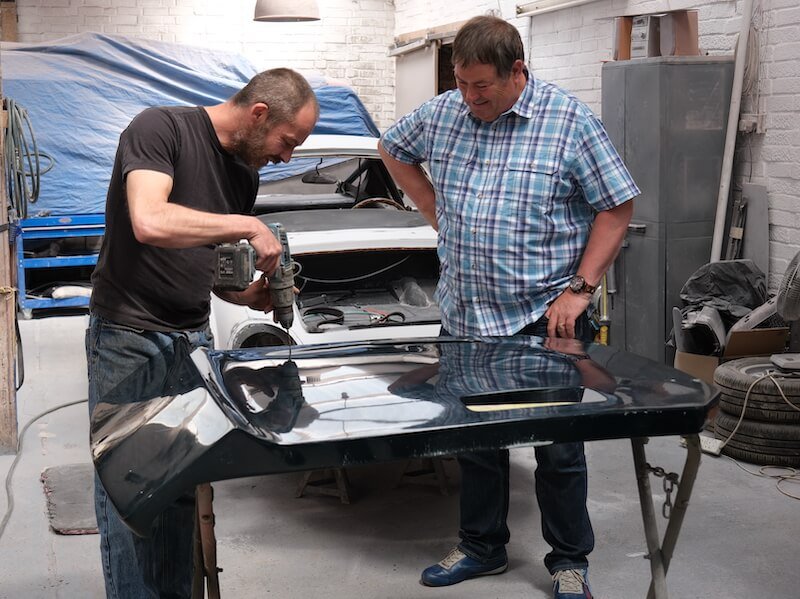 The exterior of the little sports car was finished off with a wrap that payed homage to the green and yellow livery of the Lotus Type 47, and with Elvis having repainted the chassis and cleaned the engine it was time to re-unite the two parts. It all went smoothly, and new wheels and tyres were the perfect finishing touch.

All that was left to do was to make sure the handling was perfect, and for that job Elvis used specialist equipment to check the corner weights. With some adjustments to the coilover suspension units the Lotus was ready for its rather special test drive. Watched by a group of Lotus Europa owners – including the potential buyers – the ex-F1 mechanic pushed the car to its limits on the famous Shelsley Walsh hillclimb, and it performed brilliantly. 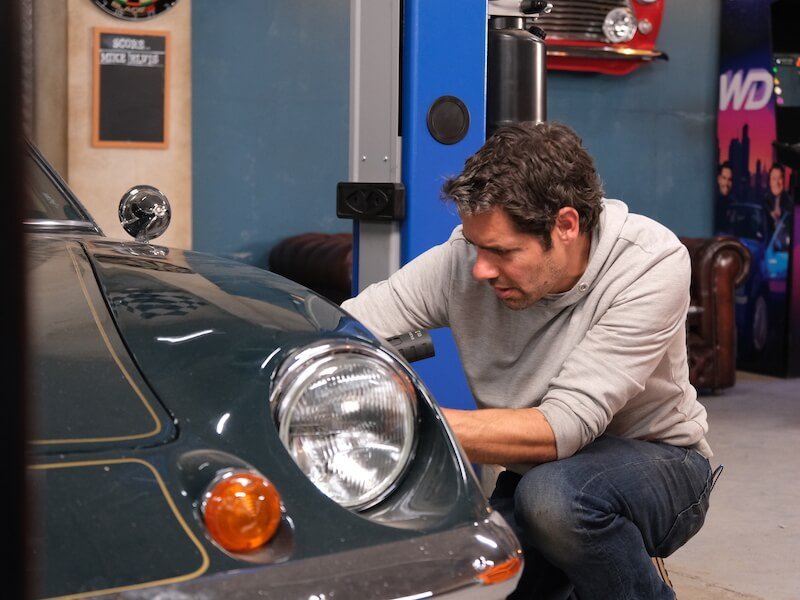 The final bill was £19,558 and it had been worth every penny, but what did the buyers think?  They loved it of course, the pair of car dealers snapping it up for just £22,500.

Mike said: “I think even the great Colin Chapman would be pleased with the results of last night’s Lotus Europa. Lotus has built its reputation for decades on great handling sports cars. Trust me to go and buy the only one in the UK that handled like jelly on an ice skating rink!

“Fortunately, Elvis has spent decades in a Motorsport career setting up cars to drive fast round corners, so having him strip the body off and tackle all the problems with the chassis, suspension, and handling was a pleasure to watch. As for me, getting the fibreglass repair done and sourcing all the other parts bought us a cracking little car at the end.

“The way it drove up Shelsley Walsh Hill Climb was stunning. The little Lotus Europa handled like poop on a shovel and we were both delighted with the results.”