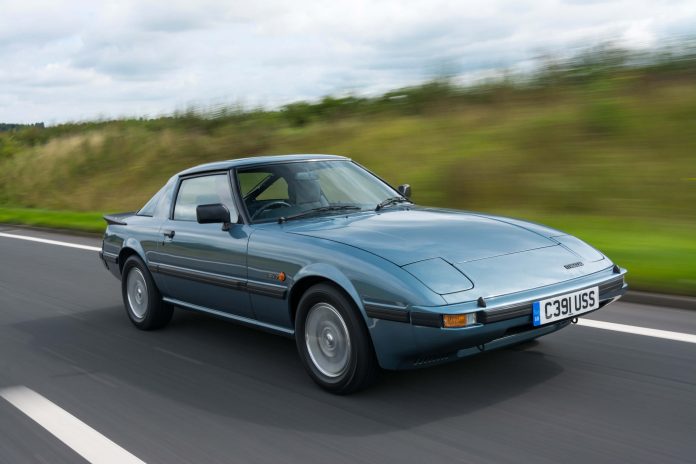 The RX-7 wasn’t the first Mazda to feature their famous rotary engine – that honour goes to the Cosmo Sport of 1967 – but the popular sports car would remain in production for more than twenty years. There were three distinct generations of model in that time, so join us for a closer look at each one.

Known as the SA22C model, the first RX-7 was launched in 1978 and with almost half a million produced it was a hugely popular sports car. What set it apart from rivals was the Wankel engine, a twin-rotor unit that produced 115bhp in UK models and revved to 7000rpm. Driving through a slick-shifting 5-speed gearbox and with near-perfect 50/50 weight distribution it was great fun to drive, the turbine-smooth engine encouraging drivers to make full use of the performance. The impressively aerodynamic body provided 2+2 seating, and although the cabin lacked the classy feel of German sports cars it was a comfortable place to be. If there was a downside it was the thirst for fuel but the entertaining driving experience more than made up for it.

Launched in 1985, the FC model was larger and featured styling that was more than a little reminiscent of the Porsche 944. But while the looks were a matter of taste there was no arguing with the performance on offer, Mazda revising the rotary engine for a power output of 148bhp. And it didn’t end there as 1988 saw the arrival of a turbocharged version that boasted an impressive 200bhp. There were more changes under the skin, too, with the first generation’s live rear axle replaced by a more sophisticated multi-link arrangement that provided even better handling. Passengers benefitted from a roomier cabin, and there was plenty of standard kit which made it good value compared to rival sports cars. Production ended in 1992 with around 272,000 made. Available from 1988, the new model meant drivers could now enjoy the RX-7’s performance and wind-in-the-hair motoring all at the same time. In turbocharged form it was certainly brisk, while a wind deflector that fitted behind the seats ensured things didn’t get too blustery in the cabin. The hood itself featured a solid lift-out panel and a fabric rear section that folded electrically, a flexible arrangement that meant owners could choose from a bit of extra sunshine or the full fresh air experience. For the third and final iteration – launched in 1992 and known as the FD – Mazda turned the RX-7 into a far more focused sports car. Still featuring a twin-rotor engine, a pair of turbochargers boosted power to 237bhp which was enough to punch the coupe from 0-62mph in just 5.1 seconds before going on to 156mph. That was as thrilling as it sounds, and thanks to a weight-saving programme that included aluminium suspension components it handled better than ever. Okay, so economy was still pretty dire and a price tag of £34,000 was off-putting (it was later reduced to a more palatable £27k) which probably goes some way to explaining why only around 200-250 made it to the UK before sales ended in 1996.  It’s more affordable today, of course, and some judicious tuning will release plenty more power. Bigger, better and busier than ever, The British Motor Show 2022 broke its own attendance record – along with some GUINNESS WORLD RECORDS –...
- Advertisement -